In the true definition of a chord, the answer is no, you can’t play chords on a monophonic synth.

The big clue is in the name monophonic. With the word ‘mono’ meaning one, and in this case, it is referring to just that, one note.

Here I’ll try to explain. And I promise I’ll try not to use too many technical terms along the way (if I’ve oversimplified I apologize too!).

What is a chord?

Chords have many purposes in music. They add a texture to the song and sometimes even rhythm. But I won’t go too deep into music theory in this article.

What does monophonic mean?

The easiest way to imagine a monophonic sound is to imagine the human voice.

The human voice is monophonic producing only one note simultaneously. If you wanted to sing a chord you wouldn’t be able to do this on your own. That is one reason why choirs have multiple people and why some bands employ the services of backing singers. When multiple people sing at the same time, with a variety of different notes, they are effectively creating a human chord.

In fact, the majority of instruments you are likely to come across when played on their own are monophonic. Wind instruments or brass etc. It is only really if you come from a piano background that chords seem like such a big deal. And as many hardware synths are fitted with a keyboard (thus resembling a piano) this is why it can often be confusing that they don’t all just play chords.

So a monophonic synth is the synth equivalent of the human voice. The way it has been designed only allows it to produce one note at a time. Time to get a bit more technical to try and explain why.

To create just a single ‘voice’ at one time a monophonic synth must already have a tonne of circuitry in it. In its very basic form, this is shown in the diagram below, with the oscillator producing a noise which is then sent through the filter to the amplifier before the noise is produced.

Each of these elements requires its own circuitry. So even this very basic monophonic synthesizer requires all this just to make a sound. To play multiple sounds at once and produce a chord you must duplicate all this circuitry, which comes at a high cost. Not just in size but in money too.

A synth that IS capable of playing chords is a polyphonic synth but what is the difference?

What is the difference between a monophonic and polyphonic synth?

So whereas ‘mono’ means one, ‘poly’ means multiple (with ‘phonic’ meaning sound).

If you are talking about analog synths, for every extra voice you add, you are doubling the entire system. So this obviously has more parts and so is more costly to produce taking up a lot more space.

Digital synthesizers don’t have this issue and hence why you find many more digital polyphonic synths than analog. Much in the same way that computer memories are growing but computers are getting smaller so digital has this major advantage.

One of the main sonic differences between a monophonic and a polyphonic synth comes about because with more voices entering the system the volume is much higher and so risks becoming distorted. This is not a problem on a mono synth but with the additional signals entering in a polyphonic synth.

It depends on what type of music you are planning to create and how you plan to use the synth.

If it is the only synth you own and you want to use it in a live band for example. Then maybe you would be better going for a synth that can play chords if that is essential to your sound. But if you are looking to use it primarily as a baseline, or as a lead. Then a mono synth will do the job just fine.

If you are planning on using it in a studio setting, however, the ability to play a chord ‘live’ isn’t as much of a problem. By laying multiple tracks and recording a variety of notes on your mono synth this limitation can be overcome. This will then produce the desired effect of a chord.

This actually gives you loads of advantages. As you can then tweak each individual note in the chord separately. Perhaps adding reverb, changing EQ or even moving them ever so slightly out of time with one another to create a much richer sound.

So in summary, if you are serious about your synths there may be a place for both in your studio. But pick a synth on its own merit. You can always create the illusion of chords in any recording with your mono synth. So as I say, don’t get too hung up on chords.

For a serious vintage analog polyphonic synth such as a MemoryMoog or Oberhein Matrix 12 you will be hit with a serious price tag compared to most analog mono synthesizers.

If you are just starting out you may read something along the lines of ‘get a polyphonic synth because most of them allow you to play in mono’. But you better be prepared to pay the price. There is also more circuitry to become faulty which may become an issue if you are buying older vintage synths and the repair costs may also make your eyes water too!

I would save your money and learn the technical ins and outs of a good mono before breaking the bank for a poly.

The Korg Minilogue is a fairly new polyphonic synth, that offers a route into polyphonic synths at a fairly reasonable price. But you will see that the Korg Monologue (the mono version) is over 50% cheaper in many cases.

3) You love the sound

Try as many synths as you can, and if you like the sound you will find a way to get it into your compositions! Don’t stress over whether it can play chords or not. As I say, you can create chords by laying tracks on top of one another.

When using a monophonic synth you are forced to focus on one particular sound, rather than a whole bunch of sounds at once. As you add more tracks this gets even more confusing and eventually, the purpose of the synth in the track is lost.

I believe you are likely to come up with more unique, better quality sounds when focussing on the single note of a monophonic synth.

Can you trick a monophonic synth into playing a chord?

If you really are set on creating a ‘chord’ or the illusion of a chord on your monophonic synth. Then there are a few tricks you can test for yourself. 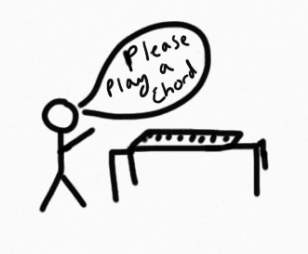 1) Use a really fast arpeggiator

If your synth is equipped with an arpeggiator. You can simply turn the speed of the arpeggiator up to a point where it is so fast the human ear hears it as a chord.

2) Add delay and sustain so that the notes overlap

If you increase the delay and/ or sustain of the notes. Then when you begin to play the second note of a chord the first will still be playing and therefore there will be some overlap.

This is similar to how a guitar chord works. When you think about playing a guitar chord, most people will strum the guitar rather than pluck it. So the last note in the ‘chord’ is actually played slightly later than the first note.

3) De-tune some of the oscillators

If your mono synth is blessed with the luxury of multiple oscillators. You can change the relative frequencies of each oscillator to make a chord.

An example would be for a minor chord-like sound. You could have one oscillator playing the root note, one at +3 semitones to the root and one at +7 semitones.

There are many other ways to get a chord from a mono synth in a live performance. Pedals are available which will take the route note and produce the remaining notes of the chord. The key with all these techniques is just to mess around and see what sounds good to you.

Can a monophonic synth play chords when used as a midi controller?

Many hardware synthesizers can also double up as midi keyboards. Which can be very handy when trying to save space in your home studio. Or if you are looking to be more portable.

But what if you want to be able to play chords on the midi keyboard? Well, fear not! The monophonic synth voice is not tied to the keyboard. Midi is a serial protocol

So there you have it, a quick introduction to the world of the monophonic synth and hopefully some clarity on why they just simply can’t play chords (unless you use some of our clever tricks ;)).

If you are just getting into analog synthesis then I would start with a good monophonic synthesizer. Get to know how it functions and works before splashing out the cash on any polyphonics.

If you love the sound then you will find a way to make chords. Either though layering up multiple notes in a recording or by using a trick to create the illusion of one.

If you still can’t bear to be without live chords. Then I would highly recommend the Korg Minilogue which actually is a reasonably cheap way into the world of polyphonic analog synthesis!

link to Are Midi Controllers Necessary? - 10 Reasons You Have To Own One

To anyone new to the world of music production MIDI can be a confusing thing to get your head around. Particularly for anyone who, like me, already knew how to play the piano or another...

After realizing they don't really know where to start with vocals on the album, this week Jack and Rob look for some expert advice on vocals.That expert advice comes from vocal coach...