Musician’s HQ was created as a hub for any musician who write or record music at home. The hope is that by using the tips on this website everyone, even the very beginner, can fill their home with music.

Musician’s HQ was founded by me, Rob Wreglesworth, after I decided I wanted to share my knowledge gained over more than 10 years of recording music in my home music studio (as well as a few professional studios along the way).

Over those years I spent literally hundreds of hours researching different methods, techniques, tips and also figured a lot of stuff myself by good old fashioned trial and error! Musician’s HQ is a result of all that research, a hub of knowledge built up and explained in a simple accessible way to hopefully help even the very beginner musicians start to write and produce their own music at home.

Music production is an area that has always been full of people who love to show off about how much they know and those who are quick to sneer at anyone who dares to try and record music at home. These sorts of people may know exactly how a modular synth works or possess the knowledge to name the specific pre-amp used by a famous band but have probably never even released a song of their own to the world.

These people might recoil at the fact that these days anyone with a cheap laptop can now produce something resembling music.

Well, I am not one of those people.

I strongly believe that anyone who has ever felt the desire to record anything from a song, to a rap, to a podcast should be able to do so, without having to feel intimidated that they aren’t doing it to professional studio standard or feeling that they have to take out a second mortgage to afford the equipment do so.

On the blog, I, therefore, feature articles as basic as how to connect instruments to a computer for recording, through to more advanced techniques for when you are ready to take it to the next level.

I will also share equipment recommendations to help you build your own home studio. Where possible I will make these as affordable as possible and they will only ever be items I have either owned myself or know someone who has tested them for me. 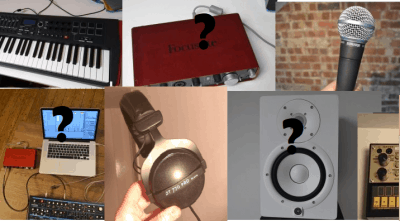 And finally, I will try and make it fun to read. Music production should be fun, but it can get quite serious and dull at times! For that reason, I try and add a bit of humor where possible as well as plenty of silly stick man drawings to illustrate some more complex ideas too.

So I hope you enjoy following the blog and can soon join the millions of other people who are filling their homes with music!

If you have any questions or article ideas feel free to email: info@musicianshq.com