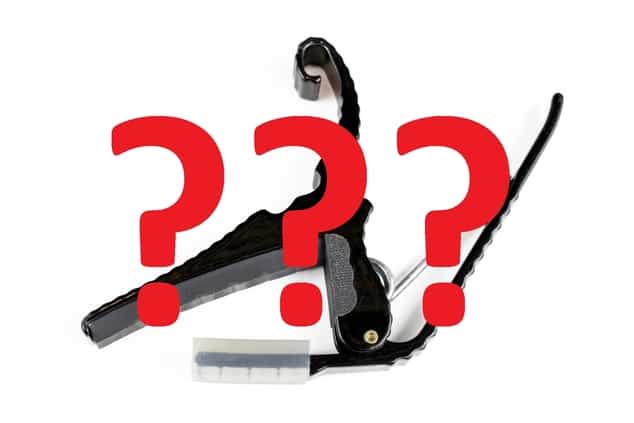 Capos are a popular way of transposing the key of a guitar quickly and easily, allowing the player to produce notes of a higher pitch without changing the shape of their fingers. They are essential weapons in the arsenal of both acoustic and electric guitarists, yet it is far less common to see a capo on a bass guitar. Indeed, some people question why you’d ever need to use a capo on a bass, given the type of role that instrument typically performs.

So, can you use a capo on a bass guitar? In short: yes, absolutely! There are several good reasons to use a capo on a bass, both practical and musical. Capos can make playing some songs easier (especially when chords are involved), and can also subtly alter the way a piece sounds.

However, before buying one, be sure that the capo you intend to use will fit! There are not many capos specifically made for bass guitars, and while many capos are large enough to use on electric, acoustic and bass alike, not all of them are – so beware.

I’ll explain below exactly what a capo is, why they’re uncommon among bassists, and why you should nonetheless consider using one on a bass guitar.

What is a Capo?

A capo (from the Italian ‘capodastro’, meaning, appropriately enough, ‘head of fretboard’) is a simple device, usually made from metal or plastic, that can be clamped over a chosen fret on a guitar’s neck, shortening the playable length of the strings and effectively turning said fret into the new ‘open’ tuning.

Let’s say I was to strum the open strings of a guitar with standard tuning. I would be playing the following notes: E-A-D-G-B-E. If I then attached a capo to the 3rd fret and strummed again, each string would be three semitones higher, resulting in G-C-F-B♭-D-G. It has the same effect as placing a finger firmly over the strings at the same fret – except a capo leaves this finger free to play other notes!

Why a Capo is Useful

The main practical application of a capo is to allow you to transpose a variety of open chords into different keys.

Imagine your band is writing a guitar part for a song, but it turns out the whole thing is a couple of semitones too low for the singer’s vocal range, and needs transposing up. Without a capo, this might turn a simple E minor chord into what some players may consider to be a much trickier chord: F#.

Regardless of how difficult the individual chords are to play, transposing a song without a capo is going to involve relearning the whole song, which is far from ideal. Sticking a capo on the second fret, however, allows you to keep the same familiar hand shapes, just higher up the fretboard – you still feel like you a playing an E minor chord, but the sound that comes out will be two semitones higher.

While there are no chords that can be played with the aid of a capo that can’t technically be played without one, why would you waste time twisting your fingers into impossible knots when a capo will cover the lower frets on your behalf? And lets face it, only the most proficient guitarists can guarantee that their top hand is perfectly in position to produce clear, unmuffled tones from every string, every time. A capo makes your chord playing easier and cleaner – especially further down the neck where the gaps between frets become smaller.

Why Are Capos Rarely Seen on Bass Guitars?

A bass guitar is, of course, simply a type of guitar, so capos work in exactly the same way on bass. Why don’t we tend to see bassists using them, then? The main reason is that they simply aren’t needed most of the time. Bassists deal largely in single notes rather than chords, and it is not sufficiently difficult to play a single F# (or any other fretted note) to require a capo.

Playing single notes also allows the option to play the same note on multiple strings, so rather than making your fingers perform a tricky five-fret leap on the bottom string, you can produce the same note by simply plucking the same fret on the next string up. You don’t have this option when playing a chord, as that higher string is most likely already being put to use playing a different note.

Why Would You Use a Capo on a Bass Guitar?

We’ve established that the way bass guitars tend to be played often negates the need for a capo – but there are still plenty of good reasons to use one, and I’ll explore the best ones below.

Chords are not exclusively the domain of acoustic and electric guitars!

Sure, the bass traditionally deals in single notes, and yes, those deep, resonating bass tones sound perfectly full without involving other strings at the same time. But there’s no harm in getting a little creative now and then.

In fact, you may be surprised at just how many famous bands have utilised bass chords at some point in their careers. Artists as diverse as Thundercat and Blink-182 have even made something of a signature sound out the technique.

Though perhaps a little harder to play than on an electric guitar, chords can most certainly be played on bass – and in a variety of ways to boot. Two-string chords are probably the most common, but (naturally) you can include as many strings as you want – there are no rules! These chords can be plucked, strummed, left to ring out or immediately muted. Each technique will bring something different to your piece of music and, given the shape of the instrument and the thickness of the strings, will sound a little unlike typical guitar chords.

Attaching a capo to a bass can also help you avoid having to execute difficult stretches between frets. As outlined above, utilising identical notes on higher strings can make a piece easier to play, but you can’t rely on this all the time. Many songs frequently switch between notes an octave or more apart, and as such they cannot be played on the same portion of the fretboard.

Even four frets can be a large distance to quickly move your fingers between, given how much further apart bass frets are to their smaller guitar counterparts.

If you have small hands, are a novice player or are performing a particularly fast-paced song, such distances can be prohibitive. You can save yourself some pain (physical and emotional!) by attaching a capo and focusing on getting the higher notes right, rather than sloppily transitioning between high and low.

Utilizing the sound of the open strings

If you’ve ever played a guitar, of any variety, you’ll have noticed a subtle difference in the sound an open-stringed note makes compared to a fretted note of the same pitch. This is particularly apparent when the open stringed note carries on ringing after other strings are played. If this multi-layered sound is what you’re after, a capo could be just what you need.

Open strings are also important when playing slap bass, or long-range hammer-ons, or utilising natural harmonics. The right notes can always be played without a capo, but how those notes sound – and how the transitions between them sound – may not be the same. It’s up to you whether you think your song could benefit from the additional open string tones that a capo brings.

How to Get by Without a Capo

A good capo shouldn’t set you back more than £10 (many are far cheaper), so I strongly advise getting hold of one to reap all the benefits listed above. You may already have a capo on your acoustic guitar that’ll do the job perfectly well. Just be sure it fits on your bass; bass necks tend to be thicker and wider than the average guitar, and many capos are designed without this fact in mind.

For trying with bass, I would recommend this capo by WINGO, the design means you can adjust the tightness which is important with the thicker strings of a bass. Some of the traditional spring capos struggle to get a tight fit on a bass.

That said, there may be times when you don’t have a capo to hand, for whatever reason. What can you do to transpose your bass part in these situations? The most obvious option is to detune your strings. Tuning every string up two semitones will have the same effect as placing a capo on the 2nd fret.

One upside of detuning is the ability to also move into a lower key. Capos can only make your instrument sound higher, but the tuning knobs can turn in both directions.

Of course, there are negatives too. Put simply, tuning can be a chore. Switching keys between songs takes time, which is especially inconvenient if you’re in the middle of a live performance. Furthermore, if you don’t have an electronic tuner to hand then you’re relying on your own ears to attain the right key.

To make the tuning process easier and faster, guitar hardware company Hipshot have a ‘Bass Xtender’ range that allows you to detune at the flip of a switch. However, these will set you back far more than a capo, and require manually screwing onto the headstock.

It’s also worth pointing out that strings can only successfully be tuned up a certain amount before the tension gets too great, and they snap. A capo on the 8th fret is fine, but detuning all your bass strings up 8 semitones is not advised!

Bassists often don’t need a capo, but sometimes they can help. Some players will find a capo makes their lives easier by allowing them to keep their fingers stationed at one area of the fretboard. Others will appreciate the tonal differences that come from effectively creating open strings in a higher key. These occasions may be rare, but for the amount you’re paying I’d suggest it’s well worth keeping a capo handy in your bass guitar case.