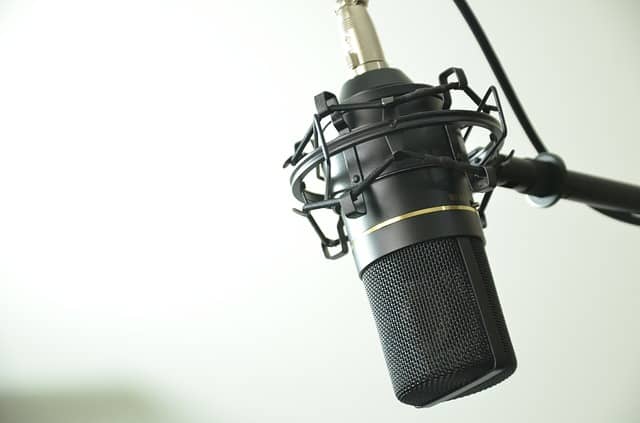 Your studio is all set up, and you finally decided to start recording. You start singing, then listen to the playback, only to realize that every single word you say sounds muffled. You look at your condenser mic, and can only wonder what happened.

Why would your condenser mic sounds muffled? There are many reasons why this can happen, most of which come with quick fixes. Some of the more common reasons for microphone muffling include:

Each of these reasons has its own fix. Some fixes are a little more complex than others, but if you give these methods a try, you should be able to get better sound.

Equipment can be very picky, and even using a different power source can make a difference in how your music sounds. Most condenser mics aren’t finicky, but sometimes just switching your hookup can help. Poorly powered condensers can sound muffled, especially if your mic needs phantom power to run.

Take a look at your power source, whether that is an amp if you are performing live, or a pre-amp/ audio interface in the studio, test it on another mic with similar stats (if you have one). Take a look at the quality of your XLR cables, too, since they also contribute to your power flow.  If the other mic sounds muffled, there may be something amiss with your powering system. Troubleshooting the power connection or even replacing it will fix this issue quickly.

2) Singing Too Far Away

Did you ever try to hear what someone standing 12 feet away from you said? It probably sounds muffled, especially if you were in a crowded room when it happens. The same happens when you decide to sing into a mic too far away.

Placing a mic too far from your singer ends up causing the microphone to pick up all the other room noise around the vocals. This leads to a track that sounds muffled, cluttered, or otherwise just soft.

Some general rules of thumb for proximity include:

This is a pretty common mistake, especially if you’re using a new microphone. Every mic has a different optimal distance, so what worked with your last setup might not work for this one. The fix for singing too far away is fairly simple: move closer to the microphone!

3) Singing Too Close To The Mic

Many musicians have an understanding that having some distance between singers and mics will reduce the amount of extra noise that gets picked up. Being too close isn’t good, either. The mic will still pick up noise, and your recording gets muffled by the Proximity Effect.

The Proximity Effect is a phenomenon that describes that deep, booming effect you get when you sing or play close to a mic. For radio pros, talking close to a mic is great. For recordings, too much proximity will cause excess low tones, which ends up making your track sound muffled.

The fix for this is really simple. All you really have to do is take a step back and see if things improve. If this was the reason, you’ll get a crisp sound in no time.

The setting of your studio will make all the difference when it comes to your recording quality. If your studio has bad acoustics that seems to echo out every little footstep, your condenser mic is probably not the problem.

Truth be told, recording in an area with too much background noise will make your tracks sound muffled and cluttered regardless of what mic you use. The fix, for this reason, is obvious, but it’s also pretty frustrating. You will have to change your studio setup or switch rooms to get a better sound if this is the case.

There are several factors that can lower the mic quality with your surroundings. These include:

If you can’t move rooms it may be worth trying some some absorption padding to stop echo or invest in a portable vocal studio such as this one. If you’ve been using the same room before and had better effects, you may have another issue on your hand.

Here’s how to troubleshoot your condenser mic’s position:

Though music salesmen might say otherwise, the fact is that no microphone can record perfectly in all situations. Price doesn’t have anything to do with how versatile a microphone is, either. Sometimes, that $100 mic you got on sale will work better than the $1000 mic you got at a luxury outfit.

A big mistake people make when they try recording for the first time is using a popular live performance mic like an SM58 instead of a recording mic. Live performance mics are great for live performances but tend to be very underwhelming in a studio setting. I personally love the tone of the SM58 for recording but some people do find it a bit muffled with a lot of low end….it also isn’t a condenser mic, it’s dynamic.

If you have a second microphone, switch your current one for it. If it works, it could just be the better option for the settings and sounds you want to have.

A broken mic might also be a possible cause, especially if you notice that muffling isn’t the only issue. Wondering if your mic’s lifespan has finally come to an end? Here are signs that you will need to toss the mic and buy a new one:

Sadly, there’s really not much you can do to fix a broken microphone in most cases. All you can really do is mourn it, toss it out, and start shopping for a replacement as soon as possible.

To conclude, try and be logical when figuring out why your microphone doesn’t sound as good as you had hoped. Try a different microphone (borrow one if you can) and try different cables, speakers. If that doesn’t work try going in a different room or changing the placement of the microphone. Finally, if none of that works it is time to buy yourself a new microphone.