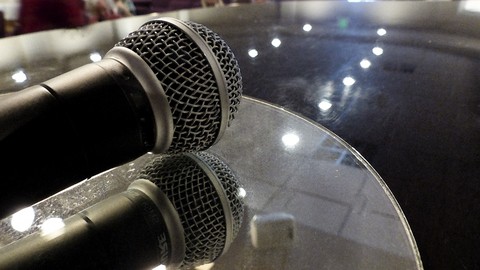 As an aspiring sound engineer, I kept wondering why some engineers use two or more microphones to record vocals, and yet the human voice is a mono instrument.

There are two main types of recording signals:

You will notice when you are listening to something that has been recorded in stereo if you have headphones on and some sound comes out more from one headphone than the other. If you are listening in mono all sounds will emanate from both earpieces equally. Stereo is used to create that ‘wide’ feeling in a recording, to make you feel like you are in the room listening to the music live.

Sound sources can either be:

Depending on what type of vocals you are trying to record and the final effect you are trying to achieve will determine whether you record in mono or stereo. Most people will record a lead vocal in mono because it is one sound source and the human voice is mono. However, there may be cases where experimenting with stereo recording might be interesting, for example, if you are recording in a room with interesting acoustics. This will make the mixing process much more difficult and you may end up with some phase cancellation so be careful

If you are recording multiple vocalists at once, either in a duet or a full choir, stereo makes a lot more sense. You want to create that feeling for the listener that they are in the room and that the sound is surrounding them.

There are two main ways sound engineers can capture stereo sound sources such as in a choir performance. In the first method, the engineer will place two microphones in front of the choir, with each microphone acting like a mono signal.

The two microphones will then be plugged into a mixer that will combine the signals into one stereo. The recording is then routed to software in stereo.

Recording Vocals with One Mic

Although stereo sounds better and more lifelike, there are instances when sound engineers prefer to record vocals with mono.

Stereo is designed to create a convincing sound image between loudspeakers. Therefore, if you are recording vocals and instruments in multiple locations, stereo captures the images of the sounds much better than mono.

The ultimate goal of stereo recording is to create a lifelike sense of the audio signal. However, there is no need to record normal vocals in stereo.

When it comes to recording the vocals of one singer, mono will do just fine. However, it is crucial to consider the acoustics of the room when recording in mono.

Recording a singer that is accompanied by a piano or any other musical instrument in stereo can be even more complicated. Such a recording can be done with crossed pairs of microphones.

In all honesty, trying to accurately capture the acoustics of the room in stereo is very tricky and quite an advanced technique. For the beginner home recorder, I would recommend recording in mono and adding effects afterward in your DAW.

The location of the recording microphones in the room is critical. This is a technique that many sound engineers take time to master.

To simplify the process, mic the singer and accompanying instrument separately but with the mics fairly close to each other. Set the ambiance mics relatively further away to capture the room acoustics.

In this case, the stereo signal can come from the ambiance mics. Therefore, the singer can use a single mic for recording vocals.

Almost all microphones are monophonic. Stereo microphones do exist and usually look different from mono microphones because they have two diaphragms.

Most musical instruments, including guitars and bass, are monophonic. Keyboards, pianos, and synthesizers are usually stereophonic and feature dual output connections (you will see L and R outputs on the back of most keyboards and synths which tells you to output in stereo).

Monophonic sound sources can be recorded in stereo DAW tracks. But when recording with only one microphone you will simply get two tracks with the identical recording on both.

There are many reasons why sound engineers sometimes prefer to record monophonic sounds in stereo channels:

Although stereo provides better sound quality than mono, many engineers prefer to record in mono because of its simplicity.

Two main factors should be considered when recording in stereo:

Despite its complexities, many sound engineers prefer to record in stereo because it provides a more realistic sound. Stereo provides sound that is much more engaging because listeners pay attention to sound signals in terms of loudness, sound direction, and proximity.

The positioning of the microphone can significantly affect sound quality during recording. A difference of an inch can make a whole lot of difference in sound.

A stereo recording uses multiple microphones to record sounds from multiple sources simultaneously. The sound difference between the left and right channels creates a stereo effect.

There are two main parameters for observing the stereo effect:

The stereo effect can also be achieved by placing the microphones in different directions, but at an angle from the sound source. The microphones will pick varying balances of frequencies.

The positioning of the microphones creates a stereo effect. A considerable drawback of this technique is it is prone to phase cancellation.

This technique uses two directional microphones positioned at an angle, preferably between 90 and 135 degrees. Once correctly positioned, the capsules of the two microphones should coincide at one point.

Use a wider angle if you want a wide stereo image. This stereo recording technique helps to eliminate mono phase cancellation.

This recording technique uses two directional microphones positioned at an angle of about 110 degrees from each other. The wide-angle of the microphone placement helps to create the stereo effect.

Turning a Mono Recording Into a Stereo Output

So hopefully you now understand that to record in mono you use one microphone and to record in stereo you need multiple. But that isn’t to say you can’t create a stereo effect in the final recording using mono recordings.

In the mixing process, you could duplicate a mono vocal track, add some effects to one and pan one to the left and one to the right. This would create a stereo effect even though the recording was made in mono. Because the voice is a mono instrument you won’t have lost anything by recording in mono and you will have made your life much easier.