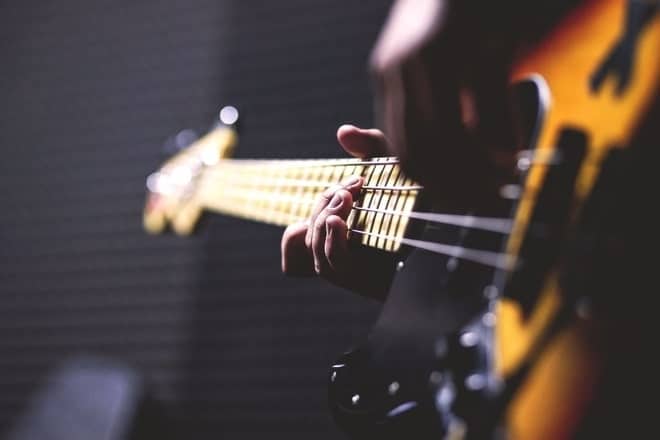 While listening to live music, I try not to get irritated by people who talk over the bass solo. If you frequently attend live shows, you’ve seen it before. Half of me is just wishing they would shush and listen, but then the other half remembers that it’s not exactly their fault. Bass is naturally more difficult for the human ear to distinguish, and it’s sadly resulted in bass instruments being one of the most underrated and unnoticed.

There are many different factors that cause bass to be difficult to pick out of a song. The anatomy of the human ear is mostly to blame, and things like overtones, recording techniques, rhythmic arrangement and others can make learning to isolate bass in your ear even more tricky.

But don’t fret, this guide will explain why bass is hard to hear and offer up some tips on how to hear bass lines better.

Reasons Why Bass Is Hard to Hear

1) The Structure of the Human Ear

Human ears are made of three main parts. Outer, middle and inner.

The cochlea is more effective at converting vibrations into auditory signals when those vibrations are at higher frequencies. The general range of human hearing is 20Hz to 20kHz according to cochlea.org. This is the range in which the cochlea is most effective; hearing pitches lower than 20Hz is possible but difficult.

Different animals have different ranges as well, which I think is interesting. It’s why dogs respond to dog whistles, and elephants would be better at hearing bass than we are; they hear from 16Hz.

Primarily speaking, bass is hard to hear because of the human hearing range. Though bass notes are usually a higher frequency than 20Hz, the minimum frequency we can hear, songs have many other auditory stimulations layered on top. When you begin adding more music, bass notes are easily muddied.

Timbre is a term used to describe the quality of a musical sound or tone. You may have also heard it called tone or tone color. It’s a way to differentiate sounds from one another. When a piano plays middle C, it will sound different than a violin playing middle C. They are both playing the same sound frequency, and their timbre describes all of the other differing qualities of the sound.

The Acoustical Society of America gave timbre a definition that I think is perfect, “that attribute of auditory sensation which enables a listener to judge that two nonidentical sounds, similarly presented and having the same loudness and pitch, are dissimilar.”

Some words you could use to describe the timbre of a guitar are warm, crunchy, bright, dark, or harsh.

Timbre plays a large role in why bass notes might evade your ears. Some timbres and qualities of tones are easier to hear than others. The timbre of the bass guitar, double bass, tuba, bassoon, etc. have a tone quality to them that is more subdued compared to an electric guitar, piano, trumpet, and those higher-range frequency instruments.

The modern tuning system we use, the Equal Temperament System, is based around the frequency of 440Hz (A4). When you play an A4 on, say, the piano, what you are really hearing is the fundamental frequency of 440Hz, and also 880Hz, 1320Hz, and so on.

If you are curious and would like to learn more about this, I recommend watching the below video from Realcelloguy.

Like I discussed in my previous post, lower frequency notes are harder for the human ear to distinguish. It’s the multiples of the fundamental that catch our ears easier since they have higher frequencies.

I believe that recent technology, mainly streaming services, have actually made us worse at listening to music. You would think it would be the opposite, with so much different music at our fingertips. One would expect the technological revolution that has allowed us access to a wide, diverse range of music that generations before us never had would make us better listeners.

It’s quite the opposite. This article from Medium describes the effects of streaming services like Spotify, Pandora and Apple Music on the consumer habits of music today.

Now we live in a culture where music plays a role in which it acts more like the wallpaper in our lives. It’s on when we drive, when we shop, when we exercise and when we watch TV. It’s virtually everywhere in our lives.

This overexposure has trained our ears to ignore most of what’s going on in a song. It’s become background entertainment, and I feel that it’s made it difficult to focus completely on hearing everything in a song.

Bass is widely used as a rhythmic instrument. The fact that bass is harder to hear attributes to this. Wailing guitar solos and punchy piano improvisation require much less effort and attention to listen to, which is likely the reason that bass solos are often talked over. People are accustomed to assigning bass in the same category as drums; as a rhythmic instrument.

We feel rhythm more than we hear it. So it’s no surprise that bass tends to blend into the background. It’s common that bass notes fall on the same beat as the kick drum, further increasing the difficulty of hearing the bass.

It is unfortunate that humans have been somewhat conditioned into hearing bass solely as a rhythmic instrument, even if it is subconscious. Bass can be a wildly melodic instrument. The standard of bass belonging in the rhythm section forces us to take extra steps to focus on what we are hearing.

The way that a piece of music is recorded, arranged and mixed might also have to do with why bass is hard to hear. Some songs might be easier for you to identify the bass in than others.

How to Hear Bass Lines: Tips and Tricks

So we’ve discussed why bass is universally more difficult to hear. If you’re someone that really struggles to hear bass loud and clear, you are not alone! Many people have a hard time with this, and it’s often hard for me too. There’s nothing wrong with your ears, and like everything else, there are ways to improve your ability to hear bass.

To hone in and isolate the bass in your ears, you’ll need to focus 100% of your attention on the music for the best results. Focus on the bass as much as you can. Over time your ears will become accustomed to picking up bass frequencies and bass lines clearer.

Find a song that you have trouble hearing the bass in. Learning the chords of that song will help you hear the bass. This is because the bass usually plays a chord tone (the root, third, or fifth and so on). If you know that a certain chord is playing, knowing the chord tones of that chord can give you a hint of what to listen for. Practice this enough, and bass notes will begin to shine through. This aural training technique is immensely helpful for so many other aspects of music aside from hearing bass. I greatly recommend practicing this.

3) Use a High-Quality Listening Device

Trying to pick out a bass line in music playing in a crowded shopping mall is not ideal. If you want to really buckle down, I would suggest in investing in high-quality earbuds or headphones for optimal sound.

I am personally an Apple AirPods user. I find the sound quality to be clear and good. But, there are a few other high-end listening devices, such as the Beats Powerbeats Pro, with a focus on amazing sound quality and specs that will be sure to aid you in your quest for a perfect bass-detecting ear.

Remember that these types of headphones should only be used for listening to music and not recording and producing as they over-emphasize the bass frequencies. For more information on that subject check out this article.

4) Use Software to Alter EQ

You can also use software to change the sound of a song. You may find it helpful to use tools like Amazing Slow Downer or Audacity to play around with the sound and see if you can bring out the bass and dampen the treble. 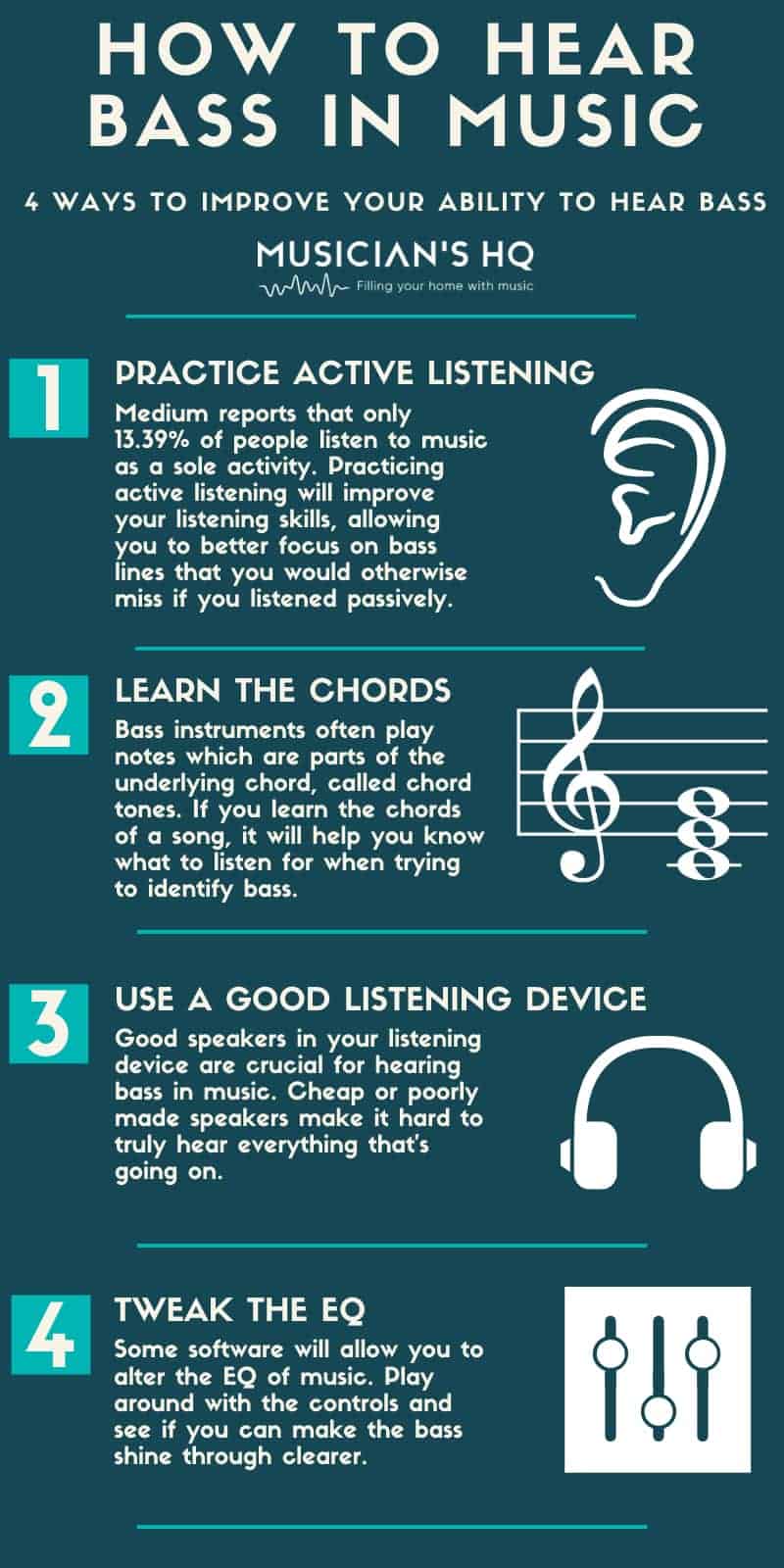 A Tip For Bringing Out Bass Guitar In Your Recordings

As mentioned already, one reason bass notes such as those from bass guitar may be hard to hear within your mix is that it is competing with other instruments in the same frequency range. No matter how much you raise the volume of the bass guitar it may feel ‘lost’.

In simple terms, sidechain compression on the kick track which is triggered by the bass track will make the volume of the kick dip slightly whenever the bass plays. This will not change the kick track that noticeably but it will make the bass guitar come through a lot more clearly. Below is a screenshot of the compressor plugin in Ableton Live. All default compressor plugins in most DAWs should be able to do this.

Bass lines are tricky to hear, especially if you aren’t a bass player or if you don’t focus a lot of your attention on the bass parts of songs. It can be difficult when there are so many other higher-range instruments and solos and other layered grooves going on.

But whether you are learning bass or you’d just like to improve your aural skills, I hope this article offered up some valuable education and advice to help you gain a better understanding of the science of why bass is hard to hear, and how to hear bass lines better.

With enough practice and effort, you will find that bass isn’t all that hard to hear. Even the highest trained musicians can struggle with following the bass 100 percent of the time – chalk it up to the human ear, and the fact that bass is sometimes intended to be felt, not heard.

The Tunelighting podcast is a podcast where we have been writing and recording a full album in one year part time. We have been running this as a bit of an experiment and hopefully to make a useful...

Songwriting is a process that’s unique to every individual. Songwriters’ methods will vary from person to person, and as you write more and more songs, your method will evolve into your own when...