Songwriting is a process that’s unique to every individual. Songwriters’ methods will vary from person to person, and as you write more and more songs, your method will evolve into your own when you discover what works for you.

But as a starting off point, this article will break down the basics of the songwriting process and explain the elements of a song so you can start putting together the pieces of your own musical puzzle.

This article will give you everything you need to know about:

In every song, there is an underlying set of chords. There can be as many as hundreds, or as little as two or three – think, Thelonious Monk vs. Bob Dylan.

If you’re reading this, you probably already play guitar and know a handful of chords. If this isn’t the case, be sure to first read my article on the 9 Basic Guitar Chords Beginners Need to Know.

In music, chord progressions are named by their roman numerals. This means if we assign each chord in a key its own roman numeral based on its position in the scale, we get the following for a major key:

And this for a minor key:

The capital roman numerals are major chords, the lowercase are minor chords, and the pesky vii° is a diminished chord.

Once you’ve chosen whether you want to write a song in a major or a minor key, you can use these handy charts for quick reference on what chords belong to your chosen key.

Once you’ve chosen your key, here are a handful of common chord progressions you can choose from as the underlying structure of your song:

I’m a huge fan of Jake Lizzio who runs Signals Music Studio on Youtube. He introduced me to a really cool “trick” to writing your own chord progressions I’d like to share if you want a little more creative freedom than just choosing a popular progression.

Writing Your Own Chord Progressions

Step 1: Only write four measures for your progression.

Step 2: Make the first chord the I chord.

Step 3: Make sure the progression ends in either the IV or V chord.

Step 4: Choose any chord from the key for the middle two measures (and feel free to repeat the same chord).

Following these steps is a foolproof method for writing a chord progression that will always sound good!

The song structure is the way you order the different parts of your song. Some genres use the terms “A section” and “B section” (jazz, especially. The common structure for jazz standards is AABA) and other genres use terms like “verse”, “pre-chorus “chorus”, and “bridge” (you’ll hear these in pop and rock often).

Let’s look at some examples of common song structures – listen along.

Fly me to the moon…

Fill my heart with song…

Fill my heart with song…

She’s got a smile…

She’s got eyes of bluest skies…

Where do we go now?

As you can see there are countless ways you can structure a song. You don’t have to include an intro, a guitar solo, or an outro. But most songs include at least a verse and a chorus. Throw in whatever else you see fit and order it in any format that speaks to you.

Melody is a crucial part of writing a song. The melody is what gets stuck in our heads.

Once you have a key and a chord progression, you’ll want to find a single line of notes that sounds good over the chords, whether it’s being sung or played on your guitar.

It can be as simple or as complex as you like. You’ll want to be sure your melody is in the same key as your chord progression, or else it won’t sound quite right.

What Notes Can I Use?

If your song is in a major key, you’ll want to choose from the notes of the major scale to write your melody. The same goes for minor keys. The major and minor scales on the guitar looks like this: 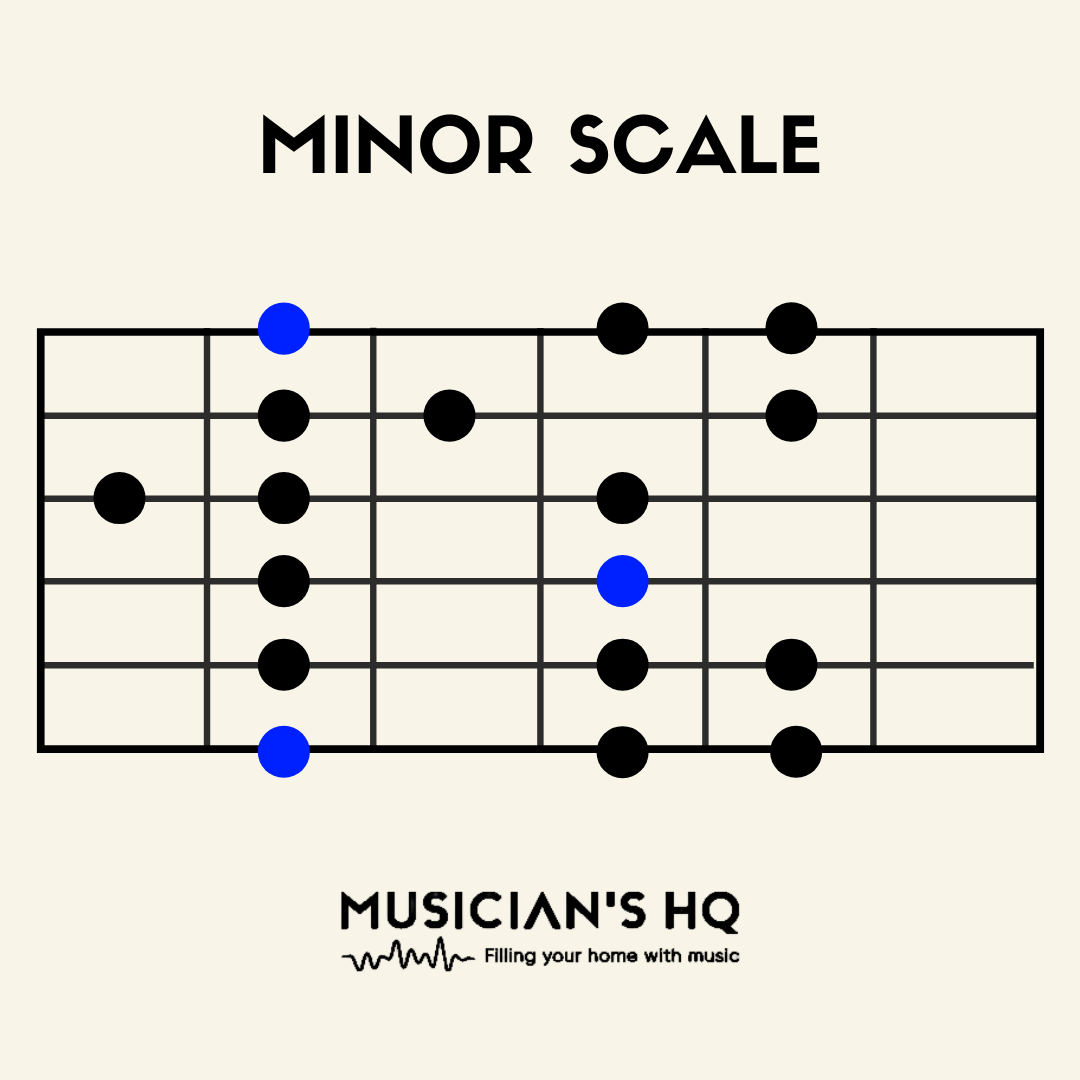 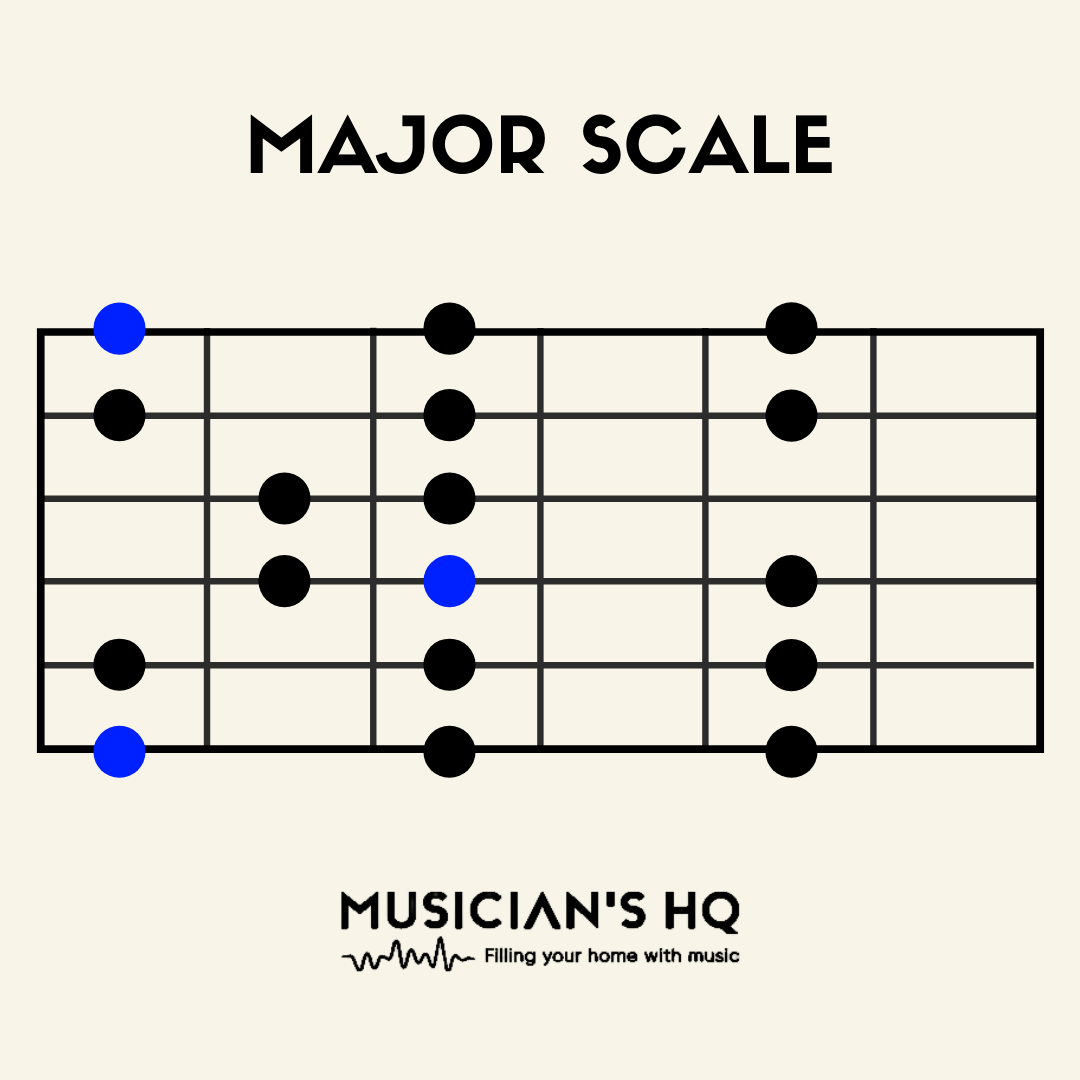 These will be the starting collection of notes you can choose from for your melody. There are so many different notes all over the guitar in any given key, so if you get tired of these, you can research all of the notes that belong to your key on the guitar, by searching something like “Key of *blank* *major/minor* on guitar”.

How to Make a Catchy and Interesting Motif

Instead of simply running up and down the scale, you want to mix up your melody to keep your listener interested. Don’t be afraid to use large leaps from note to note. For example, look at the Christmas song below.

The first two notes are a full octave apart – from A♭ to A♭ and C to C, respectively. But the composers behind these famous melodies don’t jump around too much; they keep the notes close together in the middle part of the melody.

Overall, just play around until you find something that you like; just be sure to vary up the intervals between notes so your listener does not get bored.

Ah, yes. Rhythms and strumming patterns! They can make a song instantly recognizable and spice up the mood of your song.

Try out these three common strumming patterns for your song.

Rhythms and strumming patterns are yours to play around with to find what suits the mood of your song.

Every songwriter will approach lyrics differently. Lyrics are a very mysterious part of songwriting; unlike music theory where there are general rules that will work in your favor if you follow them, lyrics can vary wildly in what works and what doesn’t.

If you’re not sure what you want your song to be about, I recommend using a writing prompt generator like this one that writes lyrics for you – it’s a good way to get that first idea or concept for your song.

I personally have the website RhymeZone bookmarked in my browser. Rhymezone is a great resource because when you type in a word, it provides you with:

Having this information at your disposal is great for coming up with lyrics!

The acoustic guitar songwriting process differs from songwriting on another instrument, for example, electric guitar or piano. When you pick up your acoustic to write a song, there are tons of different options you have, so there will be decisions you need to make aside from your key, chord progression and melody.

The standard tuning for a guitar is, from lowest pitch to highest, EADGBE. But there are other ways to tune your guitar in order to get a different sound. Explore using these tunings:

And there are so many more, but these are the most popular tunings to use if you’re looking for a different sound.

Fingerstyle guitar is a great technique to make your song more interesting than only strumming chords. Finger a chord and instead of using strumming patterns like the ones above, pluck out individual strings that you think sound good. But remember, repetition is key. Make sure to come up with a pattern that you repeat as to keep the listener interested.

Here are some acoustic fingerstyle guitar songs for inspiration:

Grace is Gone by Dave Matthews

Let Her Go by Passenger

I Won’t Give Up by Jason Mraz

Stop This Train by John Mayer

All of this information may seem like a lot to keep in mind when songwriting, but at the end of the day, what’s most important is to have fun. So I will leave you with these closing remarks.

With all of these things fresh in your brain, get off the computer (or phone), pick up the guitar and get writing. Good luck in your musical ventures!

While it might not get the same attention as the latest tech in software synthesizers, the guitar is still very much a part of pop music consciousness. There are many ways to incorporate it into...

Continue Reading
link to How To Sell Sample Packs

Sample packs can offer creators inspiration and speed up the process of making beats and writing songs. The growth in popularity of sample packs in the hip-hop and electronic music communities are...