So you want to play the guitar. Awesome! If you’re confused or unclear on where to start, you’ve come to the right article. This simple tutorial will show you both illustrated guitar chords and guitar chords with pictures of hands.

I can’t promise these chords will be a piece of cake at first, but they are essential. These chords are the building blocks of music, and knowing them will allow you to play a wide array of popular songs! Stick around until the end of the article for a list of 20 guitar songs for beginners.

These chords are geared towards beginners because they are open chords, meaning there are strings that you play open. Other voicings of these chords require barring and more complex finger positions. These 9 easy guitar chords have simple shapes that aren’t too challenging to master.

Let’s jump in and break down these 9 basic guitar chords for beginners.

How to Read a Guitar Chord Chart 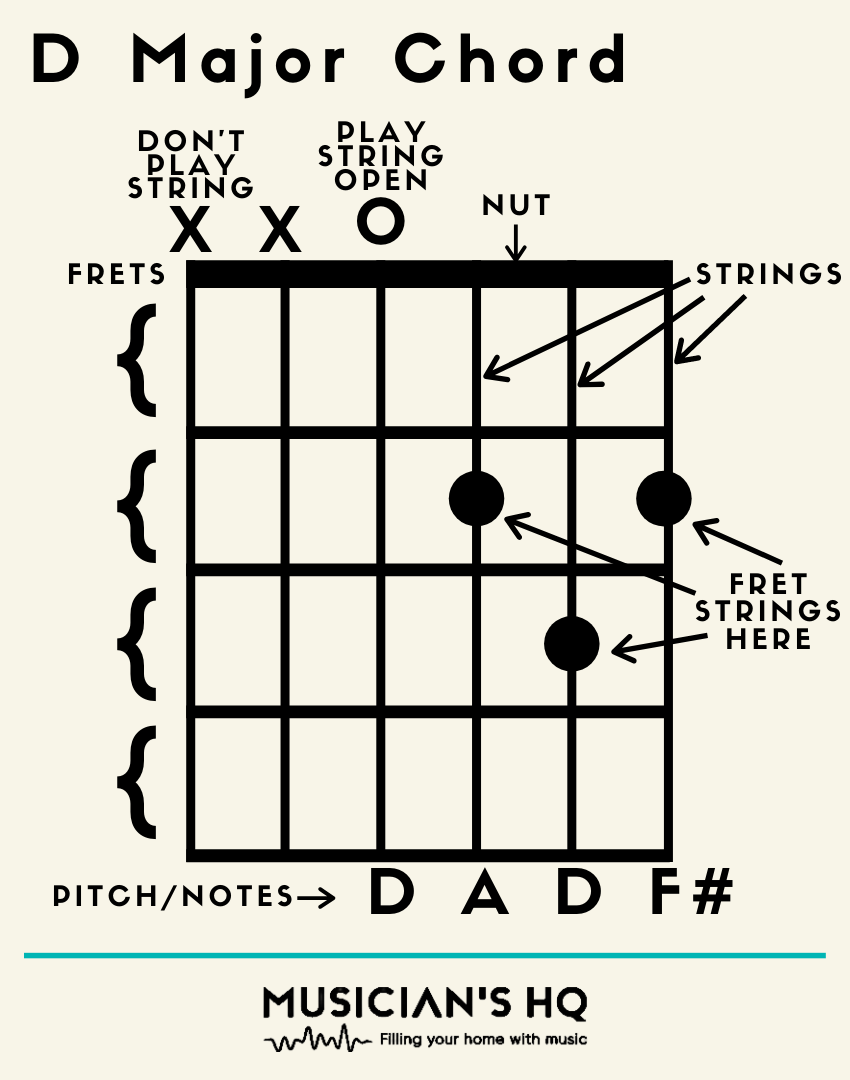 As you can see in the image above, the way we illustrate a guitar chord is by using a chord chart. Before you learn any chords, you’ll need to know how to read the chart. It’s quite simple:

The Popular Ones to Know

Let’s break down these essential chords in sections to make it more digestible.

If you are just starting to learn guitar, these four chords – C Major, A minor, F Major, and G Major – will allow you to play hundreds if not thousands of songs, many of which you probably already know!

Here’s how to play C Major on the guitar:

Here’s how to play A minor on the guitar:

Here’s how to play F Major on the guitar:

A quick note on the F Major chord, the F Major chord is a tricky one that’s challenged guitarists since the dawn of time… If you have trouble, try a different voicing by checking out this article, 8 Ways to Play the Feared F Chord on Guitar. (This shape is likely the easiest if you are a beginner guitarist since it requires no barring.)

Here’s how to play G Major on the guitar:

With those four chords out of the way, here are 5 more guitar chords that you’ll see often used in songs.

Now You Can Play These Songs!

Get all of these guitar chords down and you can play all of these songs! And if you want to challenge yourself, I’ve labeled some that include other chords/variations not covered in this article.

If this seems overwhelming at the moment, don’t worry! It’s a lot to memorize, practice, and perfect. If you feel overwhelmed, start by focusing only on the C, Am, F, and G chords. These four will open up the most doors for you to start playing guitar.

It’s a good thing that music gives us a starting point, and even better that so many catchy songs follow the same pattern. Just keep sticking with it and you’ll be able to bust out some hits at the next party!