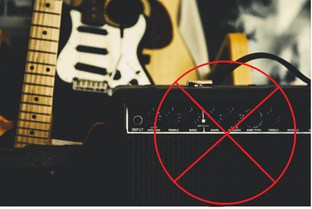 Sometimes genius strikes you when you least expect it, and you have to rush home and crank out that tune in your head before you lose it completely. However, it can feel likes ages before you get to recording when you have to go through the tedious routine setting up the mic (or multiple mics) in front of the amp and sound checking the whole rig multiple times till it’s perfect. By that point, that genius may have completely abandoned you all together. To avoid this scenario, it is extremely useful to learn how to record guitar without the need for an amplifier.

How do you record guitar without an amp?  Recording without an amp can be done with the use of audio interfaces, direct boxes, and amplifier simulator software. You plug a line in from your guitar directly to whichever you plan to use.

Having dabbled with these alternative options, I would highly recommend learning how to record without the use of an amp. Not just to avoid the painstakingly long process of setting up your amp & mic recording set up, but because of the endless amount of variety and musical changes at your disposal with a non-amp recording set up.

Pros and Cons of Recording Without an Amplifier

There is so much more latitude given when recording without an amplifier than recording with. Here are just a few key reasons it is may be the better move for your guitar recording needs.

What is Latency? And Why Does that Effect the Way I Record my Guitar?

Latency is the delay caused by the internal processing of a digital signal inside a computer. This means the signal can give feedback (as in, repeat the sound being played, back to the player.) Have you ever been on a phone call, and all of the sudden you can hear everything you’re saying being said back to you, just a hair later than you said it? It is totally jarring and off putting and makes it very difficult to continue talking. The same is true for latency on a computer when recording guitar without an amp.

This can be avoided by making sure you buy a decent audio interface.

Pros and Cons of Recording With an Amplifier

To play devil’s advocate here, let’s talk about reasons you may not want to record without the use of an amplifier.

Options For Recording Without an Amp

Depending on the type of guitar you’ll be using (whether it’s an acoustic, acoustic-electric, electric, or bass guitar) will depend on the type of equipment set up you need to record your guitar lines without the use of an amplifier. The type of sound you are trying to achieve also determines the type of equipment to invest in. If you are an Ed Sheeran type, you’ll want to invest in high quality microphones, pre-amp pedals, loop pedals, and interfaces and editing software.

If you are in a band whose sound is more electric or gritty, you will probably want to use a D.I box or an interface paired with an amplifier simulator software.

When recording the clean sound of acoustic guitar or even an acoustic electric, sometimes all that is required is a high-quality microphone. Whether you are plugging that microphone directly into your computer, or channeling that microphone through an interface, a simpler, softer sound (like an acoustic) does not require all the pre-amp, post-amplifier technology, and software.

Here are some excellent, high-quality microphones I’d recommend using for acoustic guitar recording (all under $500.)

Interfaces are the best way to record your guitar directing into your recording software, without having to fuss with an amp (and the poor-quality sound of an amp.) There are also so many recording interfaces on the market these days, and all range in price, so you can find an affordable interface that will help you achieve that sound clarity you desire and the ability to.

For the latest guide on my top audio interfaces click here.

You can then either record clean guitar into your DAW software and add effects later, or you can use amp simulator software to add the effects immediately.

There are some top of the line guitar and recording software that come with really rad presets that will completely change up your recording game. The most positive aspect of a guitar specific software is that its focus is solely on perfecting the sound of your guitar, and specializing in sound presets and tracks that will optimize your guitar playing.

Before I get into what a direct box is, I need to explain what the process of ‘reamping’ a guitar means. Reamping is a process that has two stages. The first stage is recording a clean track on your guitar, and the second stage is then sending that recorded track back through your amps and effects.

What are the Benefits of Reamping?

The old method of recording involved a guitar player playing the same song and notes for hours while the technicians behind the glass pulled and pushed nozzles to change the tone and sound live, to perfect the sound as it was happening. While this is kind of a group effort, and a magical process at that, it is an exhausting process.

The perks of reamping, is that you are able to record a guitar track in the raw, and do all the mixing in post-production instead of in real time. This saves the guitarists fingers, and it allows the mixers to really curate the sound in new, remarkable ways.

What are Reamps and Direct Boxes? How do they Differ?

The difference between a reamp and a direct box can be confusing. However, it has a lot to do with the way each respective item can control, import, and export sound, and at what level of frequency (and whether they are active or passive.) But essentially, they do a reverse process from each other.

While a D.I box takes high impedance sound and converts it to low, a Reamp does the opposite (converts low to high.) Also, a reamp is an active box with a balanced line. Whereas the passive D.I box, for example, is on an unbalanced guitar line.

Many people have inquired as to whether they even need a reamp – can’t you just use your passive D.I box in reverse? And while this notion is really quite clever, it is not correct. The way a D.I box works (and I explain it in better detail below) is that it transforms the volume of sound from your instrument down to microphone level. If you were to reverse the D.I box, it instead turns UP the signal and sound of your instrument. This will, unfortunately, result in a lot of clipping and harsh, extremely loud guitar recordings (which you do not want.)

A reamp is a box specifically made to convert a line level signal to a signal that can then be sent to a guitar amp (or other interface.) Your reamp box takes low impedance sound, through a balanced guitar line and re-channels the signal into a high impedance, and now unbalanced instrument level signal. A reamp box is meant to amplify sound in the exact same way a live amp can, but through a pre-recorded audio interface and through software.

If you want a really clear cut video explanation of reamping, look no further than this video here. (produced by Radial Engineering, who is one of the leading, industry level reamp companies.)

A direct box converts high-impedance unbalanced instrument signals into a low- impedance mic signal. The guitar line, instead of going into an amp, goes straight into what’s called a D.I box (direct injection box). So the guitar lead goes into the input jack of the D.I box. Then there’s an XLR line (like what you use for a microphone) that will be plugged into the output jack of the D.I box, which plugs into the interface, and ultimately your computer program.

A D.I box is an ideal method to use when you know that you’ll want to change the tone, clarity, or sound of the guitar recording later. Maybe you want more drive, grit, or sustain. In this case, the D.I box lends itself to post-production better (whereas the amp gives immediate gratification at the exact time of recording by letting you hear the quality of guitar you want at that moment.)

There are two types of D.I boxes. Active and passive boxes. Active D.I’s require phantom power (which you’ll be deriving through the audio interface) to power a pre-amp. Active D.I has a pre-amp that boosts the signal.

Typically if you have a passive instrument, you’ll want to use an active direct box. Similarly, if you have an active instrument, you’ll ideally want to use a passive direct box. However, there are certain brands of D.I boxes (like the Radial J48 Active) that accommodates both active and passive instruments. I would recommend this particular D.I box as it is an industry standard and that way you don’t have to buy two different kinds of direct boxes to record within your home studio.

Determining Whether an Instrument is Active or Passive?

Have Any Successful Songs Been Recorded Without the Use of Any Amps or Amp Sims?

Yes! In fact, some of the most famous bands of all time, like The Beatles and Led Zeppelin recorded some of their greatest hits without amps or amp presets of any kind. Led Zeppelin’s “Black Dog” was created by playing guitar straight into a desk, and then through two vintage compressors. The Beatles “Revolution” song was created with a D.I box. In fact, a large collection of Motown songs were recorded with direct guitar (no amp.)

Modern music-making technology has come a long, long way. You are no longer limited to only the sounds your live instrument can produce… you now have access to hundreds of thousands of music presents that can change the sound of every recording you make. While the sound quality of a microphone and amplifier set up produces high-quality sound, it is a time-suck to set up and perfect to ensure the quality of sound is indeed premium.

Amp-less guitar recording has made leaps and bounds, and the use of D.I boxes, audio interfaces, and amplifier simulator programs make recording without an amp easier, and more exciting due to the amount of options you have at your disposal for enhancing the post-production of your guitar recording. The connection line from your guitar to an interface into your computer is also incredibly user friendly, to the point where there’s really no reason not to give it a go.

link to Most Popular DAW Software - Which DAW Do Most Producers Use?

It wasn’t too long ago that this was a significant barrier to wannabe music producers, you needed to hire a studio and have lots of physical equipment.  Producing music at home is now more...