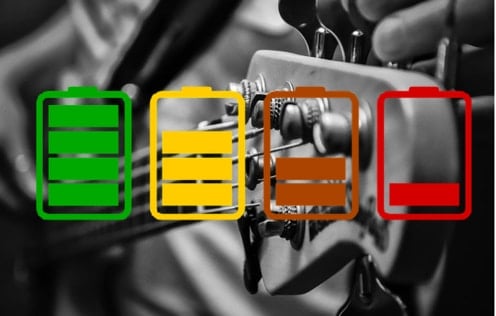 After about a year of playing my bass guitar when I was younger, it started to sound weird. The sound was crackly, fading in and out. I went to the store where I bought my amp to complain about the sound. But the store manager said it wasn’t the amp that was causing the issue, but he knew exactly what it was. It was one of the most common problems with active bass guitars, the battery was dying!

But with no indicator light on my Ibanez bass, how was I supposed to know this was about to happen? How would I know this wasn’t going to happen in the middle of a gig? So I did some research into the subject of “how often should I change the battery in an active bass guitar?” and found:

For a regular player, you should change the battery in your active bass at least once every 6 months. This depends on the quality of the battery and how often you practice with an amp and play live. Batteries will probably last longer but 6 months is a good rule to ensure you never run out of battery on stage.

But why does it even need a battery? Can You get it to work without one and how can you make the battery last longer?

Why Does an Active Bass Even Need a Battery? 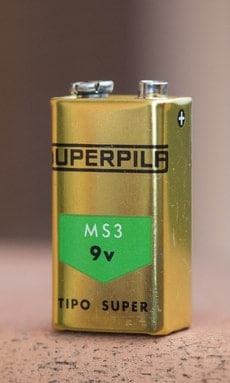 It seems like an odd thing considering they aren’t found in electric guitars and that people played electric bass for many years just fine without one.

Both active and passive electric bass guitars use pickups (clever devices consisting of coiled wire and magnets) to pick up the audio signal from the guitar strings and transfer them down a cable to your amplifier. The signal is then boosted once it gets to the amplifier to a much louder volume.

If you have a long length of cable the signal can be quite weak by the time it reaches the amplifier. Making notes that you play more softly much quieter than notes you pluck or strum with more force.

To get around this the active bass has a ‘pre-amplifier’ built in to give the signal an extra boost straight away. Ensuring a strong, consistent signal is sent down the cable to the amp.

This pre-amplifier must be powered in some way to boost the signal, and this is why there is one, sometimes two, 9-volt batteries built into the body of the bass.

How Long SHOULD the Battery Last?

This will vary depending on a few factors:

How Do I Know When to Change the Battery in My Bass? 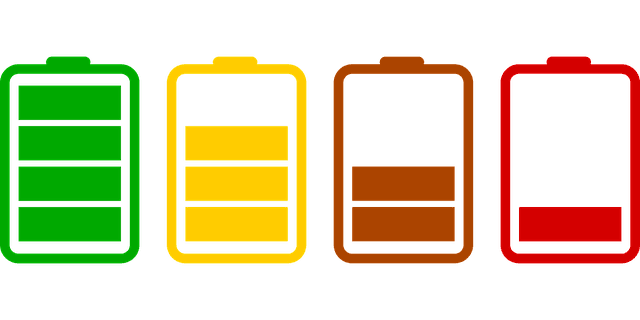 Some more modern bass guitar models have a very handy indicator light which will light up red when the battery is starting to run out. If you have one of these you are lucky.

For most of us with older or cheaper guitars, you have to use your trusty ears. The effect of a low battery will vary from model to model but there are a few tell-tale signs to listen out for:

It is unlikely to happen suddenly. The way the battery interacts with the pre-amp will mean the signal should get weaker quite gradually over time. So although it might not fully distort or cut out until the battery is almost completely dead, you may notice a change in signal much before this. This refers to normal alkaline batteries. Rechargeable batteries behave differently, which I will explain later in the article.

Use your ears. If you think it is affecting your sound, test a new battery and see if it makes a difference. If there is no difference you may be paranoid or there may be a problem with the cable or amp.

In this case, test a different cable or if you have a second amp you can test your guitar through that to check it isn’t the amp that is dying. But it is very likely to be the battery. So your first step would be to change that before worrying about the amp.

If you want to save the environment and stop changing batteries because you are worried, you can buy a battery checker such as this one for around $10. This will allow you can check the level of power left in batteries.

There is even a device you can get that plugs into your bass directly to test the battery. This is quite handy as you don’t have to unscrew the housing on the back every time you want to test.

I know some people that can hear a difference in the sound quality as soon as the battery drops below 9 volts of power. If you have really excellent hearing like this, then you can replace the batteries more regularly. But remember the batteries are still pretty much full of power so use them in something else around the house if you can rather than putting them in the trash.

There are a few really simple rules to stick to in order to ensure your battery/ batteries last as long as possible.

They may look exactly the same, but not all 9v batteries are created equal. You usually get what you pay for with batteries. So it is worth investing in some slightly more expensive ones to make sure they last as long as possible.

Whatever you do, don’t do what I did once and bulk buy a load from the market! You will be changing the battery every few days.

The battery I use now and trust is the Energizer Max 9v. 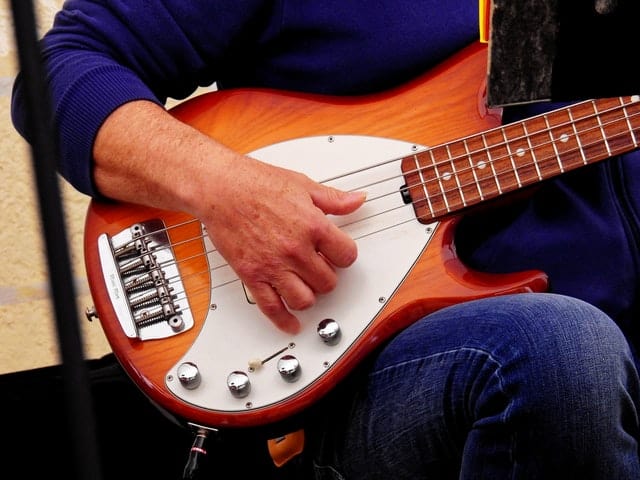 This is a really common mistake and another one I have done so you hopefully don’t have to!

Leaving the cable plugged into the bass will cause the battery to run down even when the amplifier is turned off. The jack entering completes the circuit and causes the battery to start draining.

Coming from a guitar background, where batteries weren’t an issue, I would just leave my guitars plugged in on the stand in the studio. However, this is a habit to try and stop if you have an active bass.

This could take the battery life down from months to days/ weeks because the pre-amplifier is permanently on and using power.

To be certain always unplug the cable jack from the bass when not playing or practicing.

3)     Practice in passive mode or acoustically

Many active basses now have a switch which allows you to switch to passive mode. This will mean the pre-amplifier is not requiring power and the battery will last much longer.

In passive mode, most of the EQ knobs won’t work on the body of the guitar as they need the extra power. To get around this you can purchase an EQ pedal (which is very handy to have anyway) which will allow you to shape the tone even in passive mode.

You could also just practice acoustically without an amp. I personally can’t stand doing this but if you have a quiet room you can still hear your bass pretty well.

Either way, remember to at least practice some of the time in active mode before gigging. Playing will feel completely different in active mode.

4)     Practice With a Lower Output Volume

If you insist on practicing in active mode, just playing with a lower volume can increase the battery life.

Can I use rechargeable batteries in a bass guitar?

I would definitely avoid rechargeable batteries in an active bass. Particularly if you are playing live. I know, the environment! But the issue is; unlike with standard disposable alkaline batteries they don’t slowly discharge and die over a long time.

I tested this out for myself and the batteries were full….full…..almost dead and then dead within a very short period of time.

If you were playing live, you might think everything was fine one minute and then all of a sudden things are really not ok. This just adds to the underlying paranoia because you could have tested the batteries before the gig and they read full, only to die very quickly.

As mentioned already, a standard alkaline battery will discharge power quite gradually and so you will slowly hear the change. This minimizes the chance of any on-stage shocks.

Can an active bass work with no batteries?

If your bass has an option to bypass the pre-amp and play in passive mode then you will still be able to play. However, it will sound different and you won’t be able to use the EQ controls on the bass itself.

If your bass is only active and has no passive switch it will not work when it has no battery.

In conclusion, the life of a battery in your active bass will depend on many things. There are several ways you can test the batteries to see how much life you have left but if you want to be certain, change them every few months.

And most importantly never go anywhere without a spare in your bag and a screwdriver too so you can actually change it if required.

link to Do I Need An Amp For 80 Ohm Headphones?

Headphones have come a long way, and today they are almost as complicated to understand as any other piece of audio equipment. High end headphones are now affordable and designed with unique features...

The Tunelighting podcast is a podcast where we have been writing and recording a full album in one year part time. We have been running this as a bit of an experiment and hopefully to make a useful...