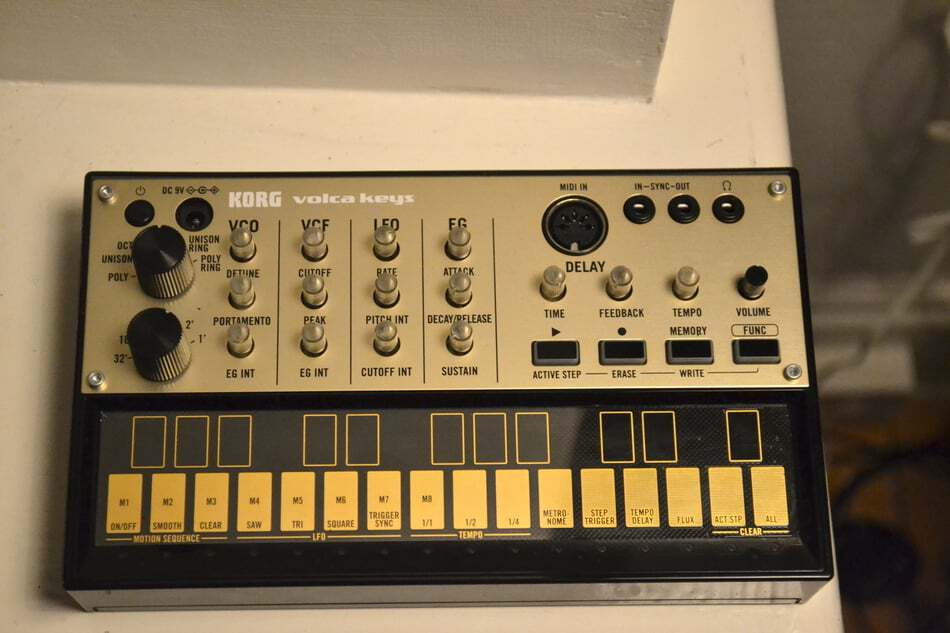 I noticed that the only audio output on all three of the Korg Volca series synthesizers is the headphones socket. There was only a MIDI in. Turns out that to record a Korg Volca to the computer you will need to connect them via your audio interface using a converter to convert the headphone sized cable to a larger cable that will plug into the interface.

Below we will discuss a little bit more about the capabilities of the Korg Volca synthesizers. With some tips and tricks to help you get the most out of these little bundles of joy. But first of all:

What is a Korg Volca synth?

The Volca series from Korg consists of three (actually four if you include the Sampler but for the purpose of this article I am leaving this one out) different mini (and I mean mini, they measure about just 26cm across) analog synthesizers.

I won’t go into too many details here about all their capabilities. But I will do an in-depth article on each synth in the future hopefully.

They offer a great entry point for anyone who is not quite ready to spend thousands on a vintage analog synth but wants to start delving into the world of hardware synthesis.

The Volca series was released a few years ago and I snapped the Volca Keys up straight away. I did so for just under $150 which is ridiculously cheap for a new synth! And I’ll be honest. At first, I kind of bought it for novelty value, they are battery powered and even come with a built-in speaker. I liked the potential hilarity of jamming with a miniature synth on the bus. But it turns out they actually sound pretty damn good!

How do I record a Korg Volca to my DAW?

In my previous article, I explained how to connect most synthesizers to the computer or laptop in a very simple setup using an audio interface. The process is virtually identical for the Korg Volca Synths.

It is worth bearing in mind if you want to record the synth outputs from multiple Volca synths simultaneously. You will need that many inputs on the audio interface, even when they are synced up.

So bear this in mind if you want to record all three together and you only have two inputs. It is also worth considering the following question:

Is the output mono or stereo?

This question isn’t as straightforward as it may at first sound.

But if you want to record in stereo. You will need a y-adaptor which converts the 3.5mm mini to two separate 1/4 inch cables such as this. However, as I say if you output to just one channel you shouldn’t lose anything.

Once you have this cable (or similar). Plug in the cable to the Volca that you wish to record, then plug one of the 1/4 inch into channel 1 and one into channel 2 of your interface to record into the DAW in ‘stereo’.

How do I sync the Korg Volca synths together?

One of the coolest things about the Volca series is that you can connect them up and sync them together which is great fun!

As you can see in the image below. Each of the Volca synths has a ‘sync in’ and a ‘sync out’.

It is very important that these 3.5mm patch leads are stereo and not regular mono, as this may cause the sequencer to skip. The manual says not so helpful things like ‘use provided cable’. But without any reason why.

But Korg fails to consider if the owner is to want a longer cable or a replacement if the provided cable breaks. So keep that in mind if you need to stray from the ‘provided cables’. 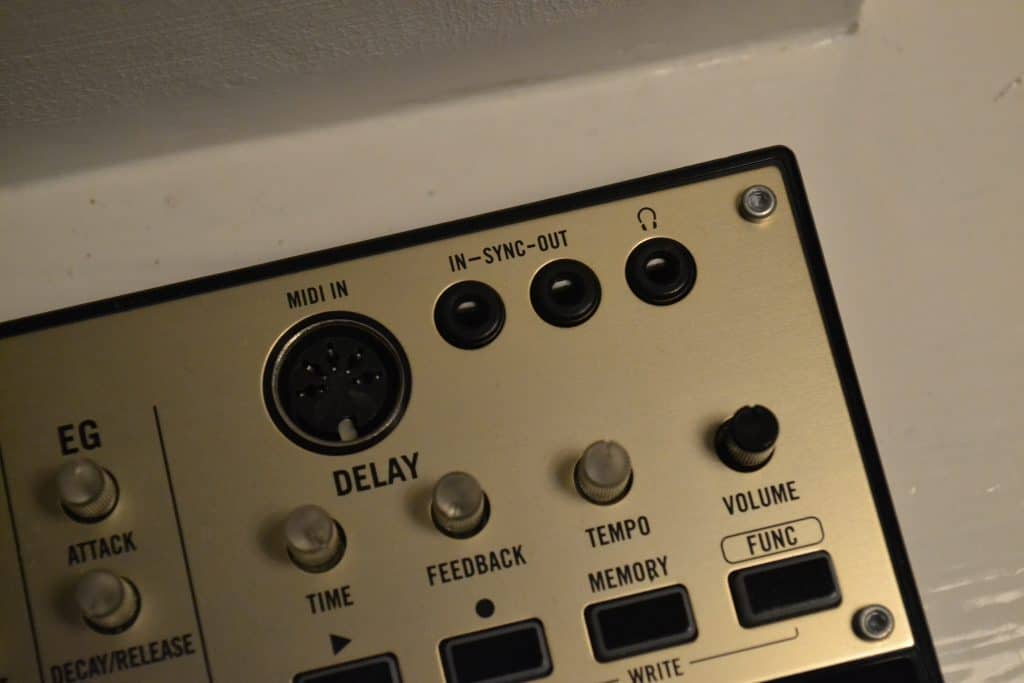 It is recommended that the chain starts with the Volca beats (if you own it). This one is equipped with a digital display that will allow you to see the BPM which is useful to have.

Now this will sync the Volca synths so that they all match in BPM. So if you turn up the BPM on the Volca Beats from 110 to 120, for example, this change will occur on all synths in the chain.

A slight issue is the fact that this will not sync up the start of each sequencer. This, therefore, requires the user to either press play on all devices at once for them to be in time. Or it means you have to wait until the end of the first loop on the first one before starting the second and so on.

There are several quite complicated ways you can get them to sync up, with some methods on the internet even involving taking them apart. Well after a bit of searching around, I found the following video where someone has found a nice trick.

Essentially all you have to do is connect a patch cable into the ‘sync in’ socket of the Volca Beats (or whichever synth is as the start of the chain). Then leave it unconnected at the other end. This means the synth is waiting to receive a signal before starting its sequencer and so nothing happens. Then simply remove the cable from the sync in socket and ‘boom!’ (no it doesn’t blow up) they all start in sync at the same time.

Can I plug a full-sized midi keyboard into the Volca synths?

You may be stressing at the idea of using the tiny keyboards that come built into these synthesizers. And if you have anything bigger than a child’s fingers, you will find hitting the right notes (especially on the Volca Keys) a little tricky.

But fear not, Korg isn’t that mean. You can plug a standard midi cable which will go from your midi keyboard (make sure it has this and isn’t just a USB midi keyboard) into the midi IN of the Volca synth you wish to play.

Which Volca synth should I get first?

So if you’ve stumbled across this article and don’t actually own a Volca synth. I would say you have to try one. Especially if you are new to the world of hardware synths.

These machines aren’t going to overwhelm you with hundred of nobs and buttons to put you off forever. But they pack enough in to keep you experimenting away for hours.

It really depends what you are looking for, but I am slightly biased as this is the first Volca I got, the Volca Keys. It will probably give you the most versatility when starting out.

Of all three though, I would say the sound of the Volca Bass is my favorite with some interesting acid housey kind of sounds possible if that’s your thing.

At the end of the day at this price, you might be able to get all three!

While it might not get the same attention as the latest tech in software synthesizers, the guitar is still very much a part of pop music consciousness. There are many ways to incorporate it into...

Continue Reading
link to How To Sell Sample Packs

Sample packs can offer creators inspiration and speed up the process of making beats and writing songs. The growth in popularity of sample packs in the hip-hop and electronic music communities are...