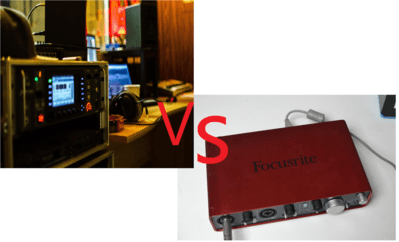 If you’re new to recording music and other audio at home, you’re going to need to know the difference between a preamp and an audio interface.

So, preamp vs. audio interface: what’s the difference? A preamp is a single piece of recording equipment designed to amplify low level signals, while an audio interface is what sends the recordings to a computer, effectively translating real music into digital music. You need both a preamp and an audio interface to record, unless your interface has a preamp installed in it.

If you’re new to recording equipment, you may not even know what a preamp or audio interface is. How do they work together, what does a preamp do, what other pieces of equipment are in an audio interface?

The best way to understand the differences between preamplifiers and audio interfaces is to understand each piece of equipment itself. They have different uses and are used in different positions of the recording process.

‘Preamp’ is short for preamplifier, which is an electrical device used to convert weak electrical signals into an output strong enough for more processing. It then may go to a power amplifier and speaker to be processed. The preamp can also be inside the instrument being played.

If you don’t use a preamp, you risk a much lower quality of recording. Because the preamp is designed to clarify music and make that louder and not just make any noises louder, recordings made with a preamp are clearer.

When Do You Use a Preamplifier?

Now, when should you use a preamp? Microphones, mixers, and even some soundcards all have them built in most of the time. They’re a very commonly used piece of recording.

When you use a microphone, the acoustic waves you’re trying to record are at mic-level, have a very weak electrical signal. Everything else involved in recording needs them at line level, a stronger electrical signal. Your preamp converts them.

This works in a similar way with instruments, only it’s instrument-level signals. Again, these are too weak to be processed by most recording equipment, so the preamp must convert it to line level. Line level is also at a much higher voltage which means louder.

Preamps come installed on most musical equipment now because of how much it’s needed to create quality recordings. Most music recording experts agree that if you want a decent recording, you need to use a preamp.

Where Do You Use a Preamplifier?

Do you leave it on the floor beside your speaker? Do you hold it? Where do you put your preamp? These may seem like silly questions if you already know how to use a preamp, but it’s a good question when you’re first starting out.

The best place is as close to the source as possible. Preamps are commonly installed in microphones, so you don’t need to worry about buying another. If it isn’t, you’ll simply plug your microphone into it.

You can get preamp/amp combinations, but they aren’t very highly recommended. The preamp uses very little energy to pick up a very low signal, whereas the power amp uses significantly more. The preamp will commonly pick up noises from the power amp, distorting and ruining the sound.

If you’re new to sound recording, shopping for a preamp can be a little overwhelming. Here are some tips to help you on your way:

Some Ideas for Where to Start Shopping

Once you decide what you need, you need to know where to start.

Solid-state electronics will give you a purer sound, while tube amps usually give a tone. Many people prefer the tube amp’s tone, feeling it gives the music character, but others prefer the electronic amps because they can fully control how the music sounds.

Preamps can have more than just one channel. They come as:

A preamp with multiple channels can run more than one signal at once. This can be helpful for bands, as they can run everything through one preamp instead of multiples. This will cut down on how many pieces of equipment you have laying around.

Audio interfaces may contain preamps, but they are not preamps. Preamps do a completely different job. A preamp may be installed in your audio interface, but it’s best to buy them separately.

You may have wondered how you get your audio from the intimidating collection of recording equipment to your computer’s hard drive. The answer is audio interfaces. These devices are made to change the signals bouncing around in your recording equipment into something a computer can understand.

What to Look for When Buying One

There are certain things you should be on the lookout for when buying an interface. Most important is computer connectivity. You’re buying this to connect your recording device to your computer, and you definitely want it to connect to your computer.

For a detailed audio interface buyers guide with some recommendations check out this article.

There are a few standard types of audio interface connectivity:

Your Input and Output Configuration

Only second to computer connectivity in importance is your input/output configuration. If you want to be able to be able to plug your guitar in and go, you need instrument level inputs, which have internal preamps. If you don’t have the right inputs, you’ll lose the sound.

How many inputs/outputs you have also matters. If you only ever plan on having two mics plugged in, you don’t need an interface with a multitude of inputs/outputs. If you want to hook up more processors to the interface, you’ll need enough line-level inputs/outputs for that.

A great rule of them when buying an interface and choosing your input/output configuration is to think of where you want to go with your recordings. If your goal is to have a professional set up with multiple processors, you should go ahead and get more input/outputs. If you only ever want to plug in a couple of mics, don’t spend more money on more input/outputs.

These days for a reasonable price, you can get a very high-quality audio interface with a great preamp installed. There are some great options out there that combine preamps and interfaces.

However, this doesn’t change the fact that the preamp’s location is not ideal. If you have the space and the money and want a professional quality product, you should go ahead and get them separate but this might be something to consider later in your recording journey.

What Else Is an Audio Interface?

You can buy a multitude of other interfaces like the USB microphone. A XLR-USB cable can connect a microphone directly to your computer. Guitar-USB adaptors can make it so whatever you play on your guitar goes directly to your phone.

Even sound cards are a type of interface. These are the cards that come installed on your computer, tablet, and phone that allow you to play music. If you aren’t sure if you need an audio interface yet, but you want better audio, you may want to try a better-quality sound card.

Other Preamp vs. Audio Interface Questions

There are a few other questions that roughly fit into this question, but get more specific. Let’s see if we can answer a few of those for you.

What Vocabulary Words Do You Need to Know?

Just like with other pieces of equipment, there’s a whole group of words that have a special meaning when related to audio interfaces. You’ll want to brush up on them before purchasing anything.

Do You Need a Mic Preamp If You Have an Audio Interface with a Preamp?

You may not need a mic preamp if you have an audio interface. Mic preamps are common, as most recorders will agree microphones need a preamp. Some microphones come with an internal preamp installed, but others require you go buy one

However, audio interfaces also come with internal preamps. If you already have an audio interface with an internal preamp and you’re just beginning, that’s a great place to start. If you’re looking for a better sound than you’re currently getting with your interface, you may want to add a preamp closer to the source.

This is because the preamp is closer to the source and able to capture it fully. By the time the acoustic waves hit the internal preamp in the audio interface, they’ve become more distorted than they are at the source, the microphone.

But What’s a Mixer?

Another common question of people first looking at the world of audio recording equipment is ‘what’s a mixer’? It’s often used audio interfaces, so it can be helpful to include when talking about interfaces and interfaces with preamps, especially if you already have a preamp and interface and want to take the next step in recording.

Some mixers have audio interfaces built in, and this can be a great option. While audio interfaces communicate between your recording equipment and computer, a mixer ‘mixes’ audio signals and combines them. If you combine the two, you cut out a step. Other than that, you don’t much need to worry about compatibility between mixer and audio interfaces.

Now you hopefully understand that the question “what is the difference between pre-amps and audio interfaces” is not a straightforward one because many audio interfaces actually contain pre-amps.

When you are starting your home recording journey I would say it is best investing first in a good quality audio interface with built-in pre-amp. This should give you a good enough sound quality to begin with and then as you progress and want to get more professional with your sound perhaps then take more of a look into pre-amps.

For a guide on the best audio interfaces for beginners please click here.