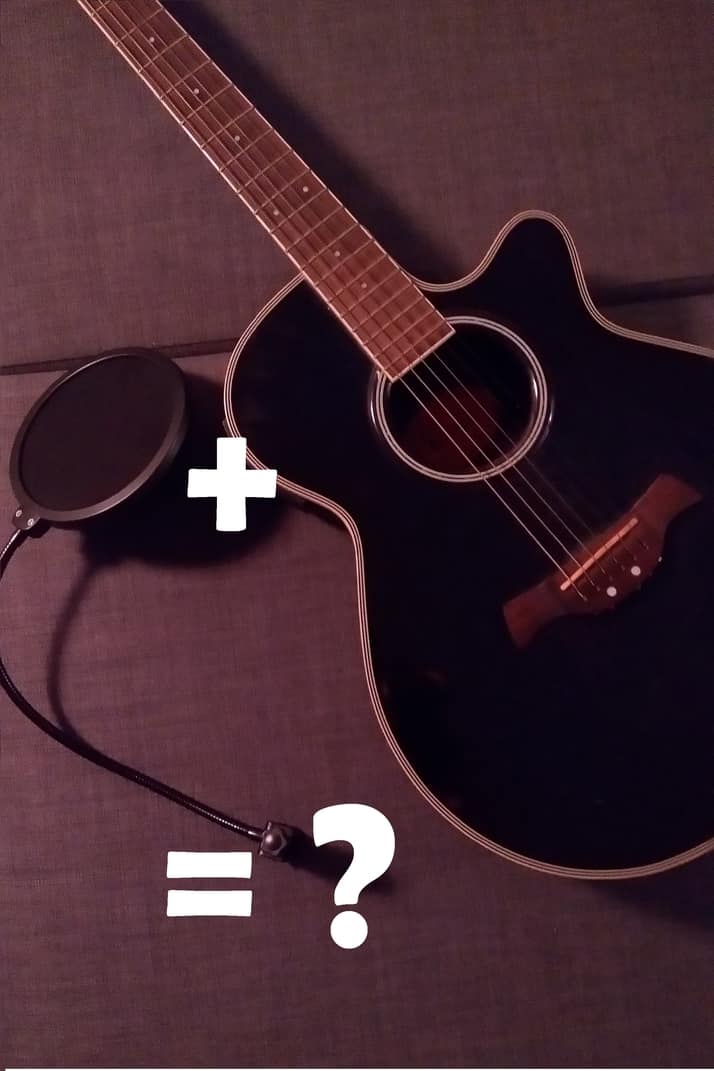 Whenever you’ve seen pictures of a professional recording studio you are probably used to seeing what appears to be a small shield type object placed in front of microphones. This is what is known in the industry as a ‘pop filter’. So when you come to record a guitar using a microphone you may ask yourself, do I need a pop filter to record guitar?

In this article, I will explain in more detail, what a pop filter is, why it isn’t required when recording a guitar and when it is required.

What is the purpose of a pop filter?

A pop filter, also sometimes referred to as a pop shield or pop screen is a piece of equipment used in recording studios to filter out ‘plosive sounds’ before they reach a microphone.

A plosive sound is a sound that emits a short blast of air at the same time as the normal sound waves. This occurs most frequently when saying or singing a word containing the letter ‘P’ or a letter ‘B’.

To test this out for yourself try placing your hand just in front of your mouth and say some random words starting with the letter P, potato, pudding or parcel. Notice how you can feel a small blast of air against your hand? That is the nasty plosive sound that you don’t want to reach the microphone and the reason for the pop filter.

In contrast, keep your hand in front of your face and say words starting with a vowels sound, perhaps orange or eagle. You will notice a small amount of air against your hand but nothing like the sharp gust produced when you said potato.

Why are plosives bad in recording?

This small blast of air or ‘plosive’ causes a sharp spike in the volume picked up by the microphone and this leads to ‘clipping‘ or what you probably know as distortion.

Below is a normal soundwave that could be travelling into a microphone. Notice how the wave doesn’t reach the ‘maximum output amplitude? This means the signal will not be clipped and become distorted.

In this example, the sound wave is playing at a constant volume, but with vocals where you are varying the volume up and down, the wave would actually get bigger and smaller all the time. This is fine as long as it stays within the area marked as the ‘headroom’.

However, if the signal is increased to above the maximum output amplitude then distortion occurs because those sound frequencies are simply ‘clipped’ from the recording. So this is what happens when you say ‘potato’ into a microphone without a pop filter. The blast of air caused by the P sound at the start of the word causes a short but dramatic spike in volume and this gets clipped. 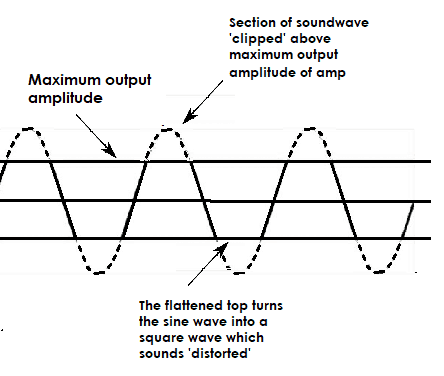 Clipping is the enemy of the recording artist because there isn’t really anything you can do about it in the mixing process. Those sound frequencies have been clipped off and so can’t be retrieved, the only way to get around this is to stop them being recorded in the first place and this is why we need a pop filter.

Even if you don’t mind these sounds, it is a good idea to filter them out to prevent the microphone from damage. Microphones vary in design, some such as dynamic microphones are more robust and can withstand quite loud noises. But if you are using a more delicate design such as a condenser or ribbon microphone (which are more common for vocals), these loud blasts of air onto the microphone diaphragm can cause damage and over time cause the microphone to stop functioning correctly or break.

What is a pop filter made of?

A pop filter needs to act as a shield to certain sounds but it doesn’t want to stop sounds passing through altogether. So for that reason, a pop-filter is usually constructed from a semi-transparent material.

This semi-transparent screen can vary in material from cheaper nylon to more expensive metal construction.

With nylon, a thin piece of quite densely woven material, similar to that of a pair of women’s tights or stockings is stretched out and clamped usually between a circular piece of metal or plastic as shown below.

On a metal pop filter where the material can’t be stretched, the filter relies on an extremely fine mesh.

The fact is, you can create a pop filter from virtually anything as long as it forms a fine mesh that allows some sounds through but blocks those plosive sounds.

Why don’t you need a pop filter to record guitar?

You may have figured this out by now but I will go over it for clarity.

We now know that the purpose of the pop filter is to filter out the short blasts of air caused by plosive sounds in vocals. Because a guitar doesn’t emit plosive sounds as it is a string instrument and not a wind instrument then it, therefore, will not require a pop filter as those sounds will never be an issue.

The dynamic range (the difference between loudest and quietest notes) can be quite large for a guitar part, particularly on an acoustic guitar where you may alternate between picked sections and strummed sections but the range is unlikely to be as up and down as a vocal part.

With this change in volumes, you may still get some unwanted clipping. But unlike with vocals if clipping occurs when recording a guitar this will be for a different reason and one where a pop filter will not be the solution.

I’ve written long articles in the past about recording acoustic guitar, guitar amps and distorted guitar so check those articles out if you want a full ‘how to’ guide.

For acoustic guitar one of the reasons why you might think you need a pop filter is because of the deep booming sounds you get from placing the microphone directly in front of the sound hole. This is where most people seem to naturally think the microphone should be placed but actually better placing the microphone slightly further away and pointing more towards the fretboard to minimize those ‘muddy’ sounds. With an acoustic, you want to capture the whole sound of the wood resonating.

How to prevent unwanted clipping when recording guitar

To prevent any unwanted clipping when recording guitar check your volume levels carefully before you start recording. Try playing a few loud, sharp chords and make sure the meter on your DAW software doesn’t go ‘into the red’ which is when clipping will occur.

Either move the microphone slightly further away from the guitar or amp (depending on how you are recording it). As long as all the notes are being picked up, even if it is really quiet you can simply turn the gain on the tracks up in the final mix or even add some compression if necessary to bring out the quieter notes. The point is you can pretty much always rescue a quiet track because all the audio detail has been recorded (just quietly), however, it is impossible to fully rescue a track that has been clipped.

What is the best microphone for recording guitar?

Now you know you don’t need a pop filter which microphone do you pick for recording guitar?

Recording with an amplifier

For electric guitar and recording from amplifiers I always use the tried and tested and industry standard Shure SM57 (click here for link to Amazon). It is cheap, robust and being a dynamic microphone can handle very high volumes without getting damaged.

You can also get a very good sound using the SM57 for acoustic guitar but because you probably won’t be reaching such high volumes, you can go for a more delicate microphone design as you are less likely to damage it.

The more delicate design of a condenser microphone will pick up more detail in the sound of an acoustic guitar than a dynamic microphone but instead of going for a large diaphragm which is recommended for vocals you are probably best of with a small diaphragm condenser which will add more clarity to your sound and not pick up too much low-end which can be a problem when recording acoustic guitars.

I recommend the Behringer C-2 as a great budget option. The best thing about this is you get two microphones that are joined together. This allows you to do the X-Y microphone technique which ensures you can record in stereo without phasing issues.

Do I need a pop filter for wind or brass instruments?

Well, this depends on the instrument, microphone and way you decide to record.

A lot of the time you will record wind and brass instruments slightly away from the microphone and so a pop filter is not needed. The only time I have seen people using a pop filter for recording brass with a ribbon microphone. This is because ribbon microphones are extremely delicate and also very expensive and so I think it was more of a precautionary measure.