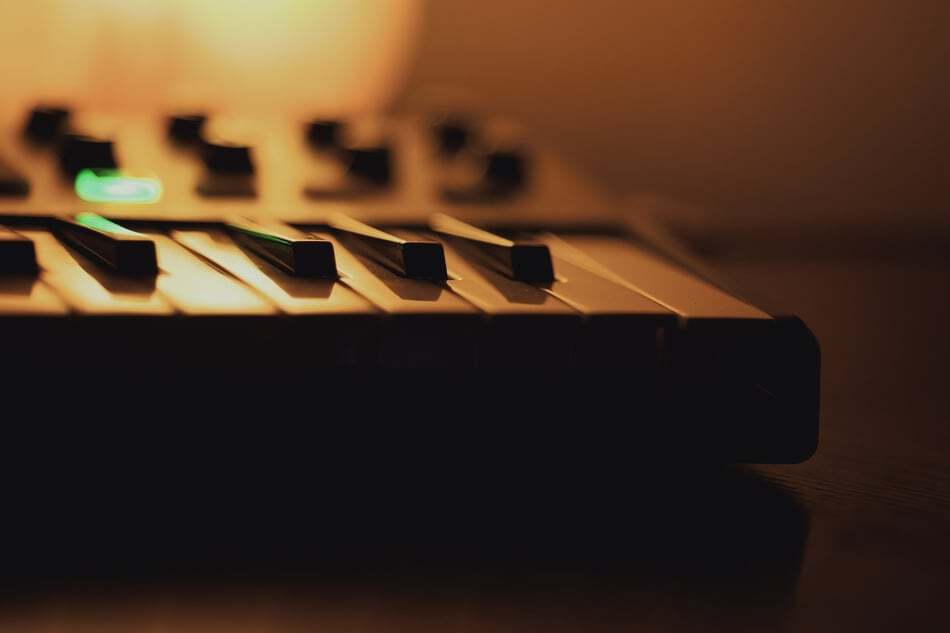 Wondering if you can use you synthesizer as a MIDI keyboard is a common question for beginners. For many of us. Space in the studio (at least to begin with) is at a premium. So having synthesizers, midi keyboards and controllers covering your entire desk is not necessarily what we want.

When I first started to build my home recording studio I was very short on space. I was living in a small one bedroom apartment and my ‘recording studio’ was limited to a desk in the corner of the living room. Guitar amps were having to double up as coffee tables or lamp stands…..you are probably beginning to imagine the scene.

The good news is that yes, many synthesizers can also be used as midi controllers! Saving you some precious space (to probably fill with more synthesizers if you are anything like me).

But can all synthesizers be used as midi controllers? Is it always a good idea? Let’s find out.

What is the difference between a synthesizer and a midi controller? 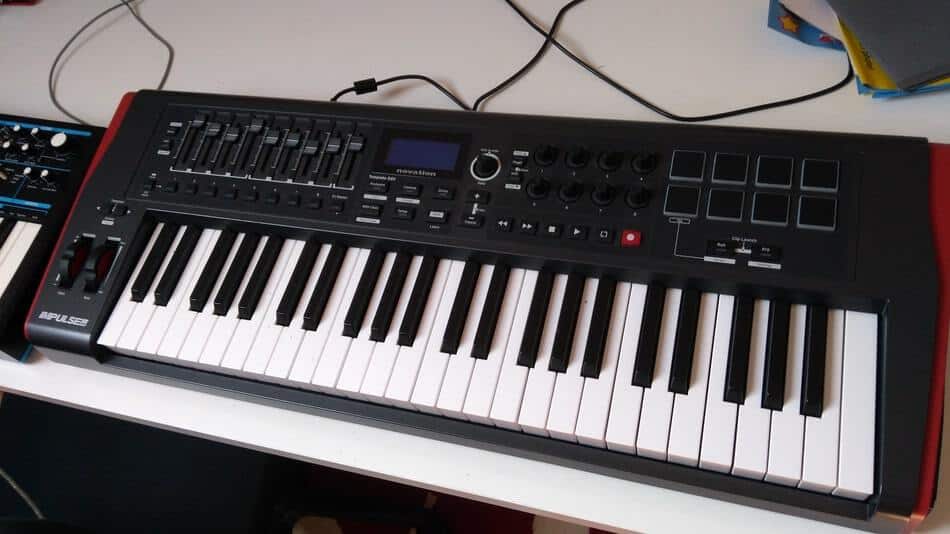 MIDI stands for ‘Musical Instrument Digital Interface’ and was created back in the 1980s so there was a standard way for musical instruments to communicate with each other. It is a data language, that in music, can specify anything from the note being played to the volume of the note.

A word that is sometimes used interchangeably with ‘MIDI controller’ is ‘MIDI remote’. Which I think makes the function clearer. The device simply acts as just that a ‘remote’. Sending digital signals to either a computer or to other musical devices than have MIDI inputs.

The signal was traditionally sent via a 5-pin MIDI cable. But nowadays MIDI can be transferred via USB. USB has the advantage of being able to send MIDI signals in both directions, too and from the device. Whereas traditional 5 pin MIDI cables can only send the signal in one direction.

For that reason, a midi controller doesn’t have to be a keyboard (although many of them are) it can be a series of pads or even a drum machine. It is just a glorified remote control.

So the important thing to understand is that the controllers (ignoring some rare exceptions) don’t produce any sounds themselves. Without being connected to something that can receive the MIDI signals and convert the digital language into an audible sound. No sound will be produced when you hit keys or pads on a MIDI controller. 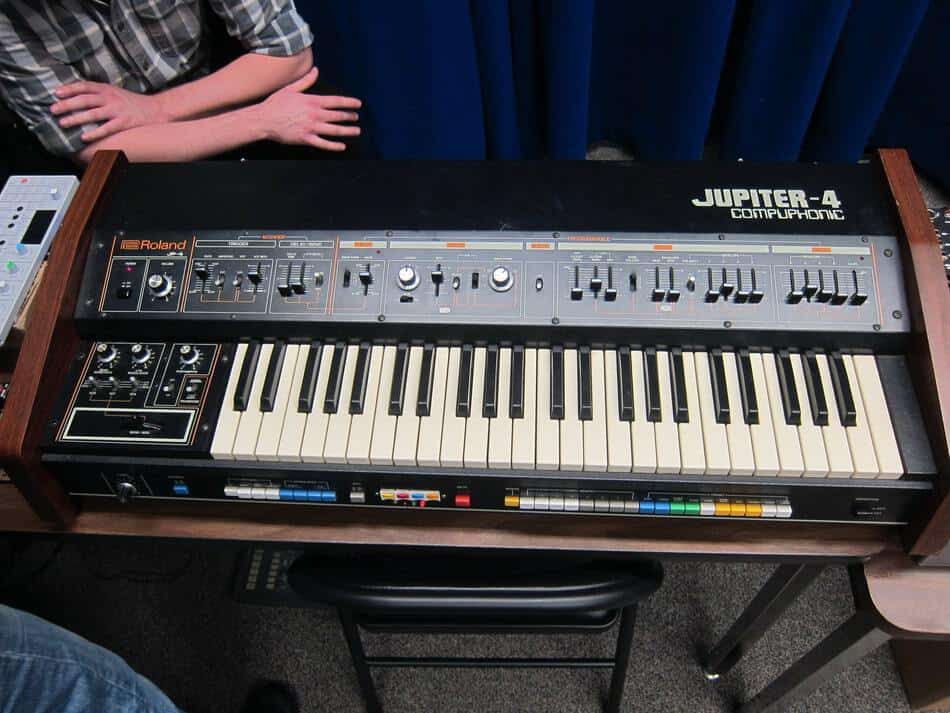 In contrast, a synthesizer is capable of producing sound from within the unit itself. This can be done in a variety of ways.

I won’t go into too much detail how exactly this is done here. But in brief:

Any sound is caused when an object vibrates creating air pressure changes, vibrating the eardrum and this is what we perceive as a ‘sound’.

This is quite an easy concept to imagine when you think of plucking a guitar or perhaps hitting a cymbal. In a synth, the concept is a bit harder to visualize. But the vibration or ‘oscillation’ comes from an electrical signal made by rapid changes in voltage within an electrical circuit.

A MIDI controller is not capable of producing sounds on its own (in most cases). And therefore this is the main difference.

The confusion for many is that (for most of us) we have grown up associating piano style keyboards with….well….pianos, and these always made noise.

This style of keyboard has been copied to most MIDI controllers. As it is a way of playing music that many people understand. So when it doesn’t make a sound as soon as we turn it on this can be a little baffling.

Can all synthesizers be used as midi controllers?

As I have detailed in previous articles, if your synth only has a traditional 5 pin MIDI output and not a USB, and you want to connect to a computer or laptop. Then you will need either an audio interface or a MIDI to USB converter.

I would personally advise against a converter as you are likely to experience latency or lag (a time delay from pressing the key to it registering on the PC). Using an audio interface with MIDI inputs should minimize these problems. And I would recommend investing in one if you haven’t already.

So yes, virtually all synthesizers can be used as MIDI controllers if they can output a MIDI signal whether that be via USB or traditional 5 pin MIDI out cable.

What are the advantages of having a dedicated MIDI controller?

Yes, using a synthesizer as a MIDI controller can be a good idea. Especially if you are looking to save a little space and to improve workflow.

But if you can afford the space (and money) to have a dedicated MIDI controller, then there are definitely some advantages.

If you want to use your controller to play piano sounds (or similar) then you may want a larger number of keys on your keyboard. Many synths (particularly some lower priced modern ones) are only fitted with a small 25 keys. And these keys may not even be full sized, if you are using something such as a microKorg which has mini-sized keys.

So if playing piano sounds is something you will want to do, then maybe your synth will just be too small. Check out this recent article I wrote for the things to take into account when choosing how many keys you should get on a MIDI keyboard.

If you are thinking of using an older synthesizer as a MIDI controller. It is unlikely to have what is known as ‘aftertouch’.

This is a feature only really found on higher end controllers. But is used by keyboard players to add some extra expression to their playing. Adding vibrato without having to use a vibrato control wheel.

For synth pad sounds, aftertouch can add a whole new element to your playing. Which can lead to you creating some pretty interesting sounds.

A keyboard may not suit your MIDI needs

Depending on what type of music you are looking to record, then a keyboard may not be most suitable.

I will quite happily record MIDI drums using a keyboard. But that is because I’m not really a great drummer! Some musicians can’t stand recording drums on a keyboard.

If you are wanting to record better drums than I do. Then a MIDI drum machine or MIDI controller with pads rather than keys will probably be a better fit than the keyboard on a synthesizer, that was definitely not designed for making the sound of a bass drum!

There are also some MIDI controllers that are designed to work seamlessly with your DAW software. This is mainly the case with electronic music, where controllers such as the AKAI APC40 are made to mirror what you see on your DAW screen in hardware form. Which is very handy if this is the style of music you are creating. This is something that can’t be done on a synthesizer.

Features such as display screens mean you can see which software synth you are controlling and improve your overall workflow. It means you won’t have to be looking at the computer screen all the time.

If you are using a synthesizer as a controller. It is likely you will still have to use your computer mouse and keyboard a lot, as these features won’t be built in.

So don’t go out and buy a synthesizer if you solely plan on using it as a MIDI controller. You would be much better off investing in a good quality MIDI keyboard. That will hopefully work effortlessly with your software synths or whatever else you want to control.

Likewise, if you want to use it mainly for percussion sounds. Then maybe a drum machine would be a better fit as a MIDI device.

However, if you already own a synthesizer and it is capable of sending MIDI signals to your computer or other devices (whether that be via USB or MIDI cable) and you want to save some space/ money/ you won’t be doing it that much. Then it is definitely a possibility.

Like with any instrument just give it a go and see what feels best to you.