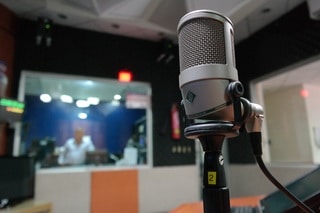 When you’re recording vocals, the track will have a certain ‘level’ which will be measured in decibels (dB), this figure is important. If you record the vocals at a level that is too quiet, they will not be heard or understood over the other tracks in the mix. If you mix them too loudly, they will stick out.

What dB should vocals be recorded at? You should record vocals at an average of -18dB for 24-bit resolution. The loudest parts of the recording should peak at -10dB and be lowest at -24dB. This is to keep an even balance on the level of the vocals without distortion.

Why is decibel range so important when it comes to recording vocals? Read on to find out more about what decibels actually are and how their levels affect sound recording quality.

What Are Decibels in Vocal Recordings?

A decibel (dB) is an extremely varied unit of measurement, but when it relates to acoustics such as those used in vocal recordings, a decibel refers to a unit of sound pressure level.

While the decibels in a sound are what determine how loud it is to the human ear, decibels are not actually a measurement of something’s loudness. In music, decibels are not only used to describe aural sound levels, but also voltage and power in musical and recording electronics.

A decibel is a different unit of measurement than a hertz (Hz), which describes the frequency of a sound, rather than its loudness.

Decibels are important as a unit of sound measurement because the human range of sensitivity to sound is very wide, which means it is easy for some background sounds to drown out the sound you want to be heard most clearly on your recording.

What is Bit Depth and Resolution in Vocal Recordings?

Bit depth affects audio resolution, which in turn affects how clear and defined an audio sample sounds to the ear. 24-bit resolution is considered “high definition” resolution in recording both audio and video.

Why Is It Preferable to Record Vocals at 24-Bit Resolution?

Because of the precision of high definition recording, with 24-bit resolution you can record at -12dB or -14BdB and even when you raise the level (if you have to) the amount of noise in the noise floor you’ll add is negligible.

Recording at lower levels of bit resolution gives the sound engineer less wiggle room to work with, and these recordings are more inclined to noise floor issues and audio clipping at the lowest and highest levels of the recording range.

Balance Is Important in Determining Decibel Levels for Vocal Recording

The reason decibel levels are important for vocal recording is because sound engineering is about achieving balance for the best aural experience.

There are a couple of concepts with regards to sound engineering that you need to understand in order to understand why vocal recordings should be done at a certain level of decibels. These concepts consist of the following:

Why are these concepts important in vocal recording? The vocals are arguably the most important part of a record track, whether you’re recording a podcast or someone singing over instrumentals.

That’s why it’s crucial to have your decibel levels and gain set correctly so that the vocal recording is neither too soft to hear properly nor breaking up with distortion from being recorded too loudly.

How Loud Should Vocals Be in A Recording Mix?

Because the vocal track of a song is usually the most important element other than the beat of a song, the lead vocal should be moderately loud and the loudest element in a mix next to the drums.

How loud the vocals in a recording mix are depends on the type of vocals, however. Some styles of music require that the vocalist’s voice be more forward than the background instrumentals, while other types of music are instrument-centric, and the voice is considered the background.

Loudness of the vocals is also dependent on the timbre of the singer or speaker’s voice. Some vocalists have a powerful timbre and naturally project with a forceful tone, whereas others are more soft-spoken and the levels of their vocal recordings will need to be turned up.

Before doing a serious audio take, try to take some sample clips of a vocalist’s speaking or singing voice and use them to gauge the gains you need to set for the true recording.

Be warned singers have a tendency to sing much softer during a soundcheck than when it comes to actually recording so bear this in mind.

What Is Audio Clipping in Vocal Recording?

Audio clipping is when a vocal recording is created at too high a level of decibels, and the vocals in the upper register become distorted. This is known in the sound engineering industry as audio clipping, and it is one of the biggest things sound engineers strive to avoid when recording.

Audio clipping is a form of waveform distortion caused when an amplifier is pushed to deliver an output voltage higher than its maximum capability. In visual terms, this is when a sine wave hits its ceiling and becomes a square wave.

When recording vocals, you should generally not allow the recording to reach -0.1dB, as this is the range that risks audio clipping.

Is Audio Clipping Always A Bad Thing in Vocal Recordings?

it’s better to rely on your ears to determine whether an audio is distorting or not, rather than the meter.

To avoid possible distortion though, it’s always better to give yourself plenty of headroom so that you don’t have to worry about it at all. In vocal recording, clipping should be avoided as much as possible, as you don’t want any distortions that will make the sound of the vocal track less clear.

One recorded no matter of mixing or mastering can recover the sounds lost in a clipped vocal track.

If you find yourself consistently in the red when recording vocals, you might need to choose speakers able to recreate the levels desired and then match the speakers with an amplifier powerful enough to drive the speaker system.

It would potentially be a significant financial investment, but higher quality amplifiers are designed to provide peak power quickly. This ensures accurate playback and quality recordings.

By using test tones, you can determine at what point your equipment will begin to clip. You can also watch an oscilloscope to see exactly where the sound wave “squares out.”

If you are serious about recording vocals, it’s worth it to invest in an oscilloscope so you can visualize the sound waves and fine-tune the settings on your equipment for optimal levels and clarity of sound.

This is the point that the sine wave form is lopped off on the top and causes the sound wave to be clipped off. Proper gain setting is important to avoid clipping.

How to Record Good Vocals

There are a few steps you can take along with adjusting your decibel levels to ensure that you get a good vocal recording. Here are some of the things you can do to make your vocal recording as clear and precise as possible:

Choose a room with good acoustics

This means choosing a room that doesn’t have too many reflective surfaces to cause reverberation, as well as a room that is not too muffled.

Reverberation makes pitch corrections more difficult and can make post-production dynamic processing sound unnatural, while too much sound absorption in a room leads to muffled highs and unnatural sound.

Good acoustics require a mix of these two factors, so experiment with your recording equipment and find an area that yields good, balanced results.

Do not position your microphone in the center of a room to avoid the build-up of standing waves that can cause distortion in the sound.

Instead, position the microphone as far from reflective surfaces (such as walls) as possible, just off-center in the room.

When you’re evaluating a rough vocal mix, listen to the mix with your eyes closed to check the levels from an aural standpoint.

It can be overwhelming to try and track vocal recording quality with the mixing board, but the most important thing about a sound recording is what it sounds like, so use your ears and listen carefully to assess the sound quality as well as the decibel level of the recording.

Closing your eyes can shut out alternative sensory input and can increase your ability to hear background noise.

Once you have evaluated the rough vocal mix yourself, bring in someone that hasn’t heard the vocal recording before and have them listen with their eyes closed to check the decibel levels.

How to Adjust Levels on a Rough Vocal Mix

If you evaluate your rough vocal recording and you can’t hear the speaker/singer or find yourself straining to listen to them, drop the background music levels down 2dB and then listen again.

Repeat this process until the vocal recording plays back at a desirable decibel level without being drowned out by other tracks on the recording.

This process is the reason that leaving both headroom and space above the noise floor in your sound recording is important.

If you record your vocals too quietly, you will have difficulty hearing them without quieting the other tracks, which can introduce unwanted noise at the noise floor if you have to turn them down too low.

Learning to Listen to Vocal Tracks is Key

Along with choosing correct decibel levels for vocal recording, it’s important to learn how to listen to vocal tracks to figure out how to incorporate the elements in those tracks you’d like to emulate in your own.

Listen critically to vocal records you’d like to imitate, even if you only listen for a single element of the track. If you listen to some of your favorite records on high quality headphones, you’ll notice that the noise floor in some of the most legendary vocal tracks in history is fairly high.

Decibels are Not an Exact Science

While it is easy to give an average level of decibels for you to record vocals at, the range of the human voice and the range of sound recording equipment available means that the optimal dynamic range for recording can change a lot depending on what equipment you’re using.

You should aim for an average of -18dB for a vocal recording to avoid both clipping and a loud noise floor, but the most important things for successful vocal recordings are to know your equipment well and to provide the vocalist with a recording studio that features good acoustics.

link to Most Popular DAW Software - Which DAW Do Most Producers Use?

It wasn’t too long ago that this was a significant barrier to wannabe music producers, you needed to hire a studio and have lots of physical equipment.  Producing music at home is now more...