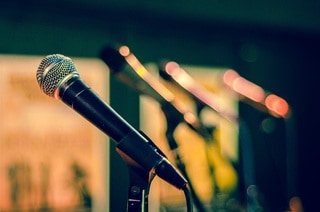 Tapping a microphone to test it has become a commonplace trope in popular fiction, but you shouldn’t do it. If you try replicating this movie staple at your next gig, you might draw some pinched or annoyed looks, and the sound operator may even mute the microphone.

Besides potentially blowing a speaker worth thousands of dollars, you could be doing a much more effective sound check that doesn’t involve hurting the ears of everyone in listening range. Read on to find out more about why tapping microphones is bad practice and why not to do it.

Why You Shouldn’t Tap A Microphone

When you tap a microphone to test it, it creates a loud noise in the microphone, which can potentially send large transients through the system. This can cause damage to both the microphone and any speaker system the microphone is hooked into.

While not every kind of microphone is susceptible to damage in this manner, it is difficult to tell different microphones apart, and if you aren’t using your own equipment, it’s best to err on the side of caution and just not tap any microphones at all.

Ribbon microphones and condenser microphones are particularly delicate and should never be subjected to harsh impacts.

You can damage microphones by tapping on them to test them, but unless they are condenser or ribbon microphones, the primary threat may be to the speaker system, which can get blown by hard transients.

Hitting a microphone hard enough can result in thousands of dollars of damage if the feedback from the microphone blows a speaker, so whether it’s your own equipment or someone else’s, tapping microphones should just be best avoided in general.

Microphones Are Sensitive Pieces of Equipment

Knocking the delicate internals out of place can negatively affect the microphone’s ability to conduct sound and may even cause it to malfunction entirely.

When you tap a microphone with internals like these, you can cause irreparable damage sort of like a blown speaker in reverse. Like speakers, microphones can run into the thousands of dollars, so they should not be handled in a rough manner ever.

Along with depicting people tapping on mics to test them, popular fiction always likes to depict people “dropping the mic”. Needless to say, don’t ever drop the mic unless you are intending to break it!

Tapping A Microphone Is Unprofessional

Tapping a microphone annoys everyone in the room, sound operators most of all. If they catch you doing this, they will likely mute the noise anyway, which defeats the purpose of tapping the microphone to begin with.

Trust that the microphone is hooked up properly. It was someone’s job. If it takes a moment for the sound to come on, that’s because the sound operator is waiting for you to begin speaking to turn it up. This is how they avoid feedback from the stage prior to someone deliberately speaking into the mic.

Tapping A Microphone Can Injure Those with Special Needs

While listening to a tapped microphone over a loudspeaker is annoying and painful enough to regular people, tapping a microphone is particularly inconsiderate to those with special needs.

Tapping a microphone can also hurt the ears of infants and small children, or at the very least frighten them. There are so many other better ways to check your microphone, there’s no excuse to deafen or scare the audience.

Tapping a microphone may seem like the quickest way to check the sound system but try to be polite and thoughtful to your prospective audience and just don’t do it.

Better Ways to Sound Check A Microphone Than Tapping It

Scratching can sometimes be preferable to a voice check, since a microphone might pick up a nearby voice and cause confusion as to which microphone is working in a multiple mic system with multiple sound operators sound checking in close proximity to each other.

What to Do if The Microphone Isn’t Working

If you suspect a microphone of not working when you’re trying to speak into it in front of an audience, it is easy to go for the “test tap” out of nervousness. Many would-be performers or orators also feel the urge to pretend to fix the microphone stand or inspect the wires.

If you think your mic isn’t working, continue to talk into it so the sound operator knows to turn it up if they haven’t already. If your microphone is truly out, the sound operators already know about it and are likely attempting to fix it, so just stand by.

Because it is such a popular image in media, the myth that tapping microphones to test a sound system continues to persist in our culture, despite the protests of the sound engineering community. Most people go their whole lives without knowing why it’s a bad thing to do.

So next time you see someone about to go on stage, give them a gentle reminder that they shouldn’t tap the microphone to test it. You could be saving them thousands of dollars in damages or, at the very least, an audience that is irritated right out of the gate.

Audacity is free, open-source audio software that can be used for basic audio production. The fact it costs nothing means it is a popular choice for beginners or those on a budget. As you progress to...